The Port of New Orleans (Port NOLA) moved more containers in 2018 than at any time in its history, totaling 591,253 twenty-foot equivalent units (TEUs), up 12.3 percent compared to one year ago. The record marks the fifth year in a row Port NOLA has surpassed the half million TEU-mark at its Napoleon Avenue Container Terminal, which is operated by New Orleans Terminal and Ports America. 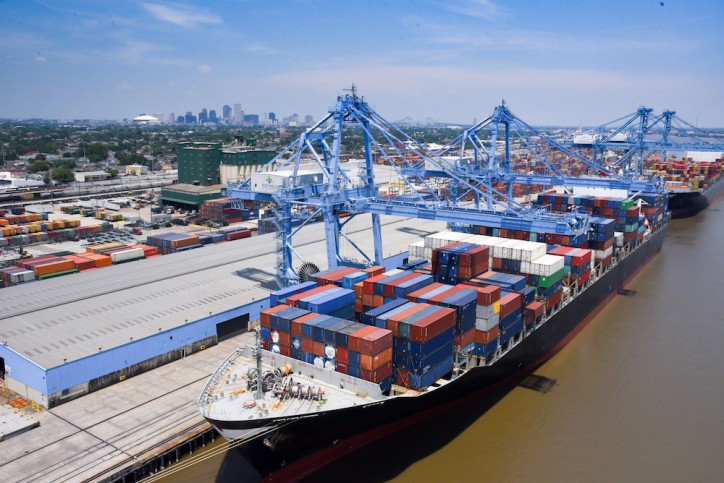 The arrival in October of the Pusan C, a 9,500-TEU vessel operated by Marsailles, France-based ocean carrier CMA CGM, marked the largest container ship to ever call on the Port.

Port NOLA is also growing the nation’s largest container-on-barge service, in partnership with the Port of Greater Baton Rouge and operator SEACOR AMH. In 2018, that service moved 26,759 TEUs by barge, up 58 percent compared to 2017. The service repositions containers from Memphis, Tenn., to Baton Rouge, La., where they are loaded with plastic resins and shipped by barge to Port NOLA to be loaded onto container ships for export to global markets.

“Port NOLA continues to work with Louisiana Economic Development and the U.S. Maritime Administration to grow and expand the inland service,” Christian said. “The service helps reposition equipment, reduce congestion on our roadways and manage our growth in an environmentally friendly way.”

Port NOLA now features 11 weekly container services from three major global alliances as well as independent carriers, with direct connections to 58 global ports and more than 450 others through connecting services.

“In the short-term we plan to double our capacity at the Napoleon Avenue Container Terminal to more efficiently service larger ships and expand our container yard,” Christian said. “Part of the investment includes an expanded partnership with Ports America, which will invest $66.5 million into infrastructure and equipment, accommodating up to four new 100-guage container cranes to facilitate larger ships, along with investments of up to $300 million for expansion opportunities within our three-parish (county) jurisdiction.”

Another driving force for container traffic is its growing intermodal service to critical markets Port NOLA serves. Intermodal cargo volumes realized 15 percent growth from 2017 to 2018. Intermodal services by CN Railroad into Memphis, Chicago, Detroit and Toronto and Kansas City Southern’s weekly service into the Dallas-Fort Worth market are critical inland markets that will further grow volumes in New Orleans.

“The New Orleans Public Belt Railroad, which the Port acquired in February of 2018, is a crucial element of success for Port NOLA and the entire New Orleans gateway,” Christian said. “Our industry partners and Class I railroads are working collaboratively on the most efficient, responsible and vibrant gateway possible,” Christian said. “In addition to the KCS service into Dallas-Fort Worth, we anticipate launching new intermodal services soon.”

Source: Port of NOLA (Additional information about the Port of New Orleans at CruiseMapper)