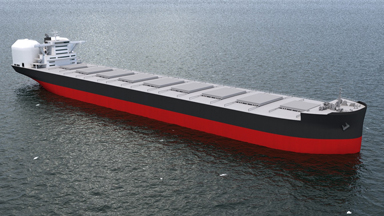 Kawasaki Heavy Industries, Ltd. announced Monday (Jan28) that development of a design for a 200,000 deadweight tons (“DWT”) bulk carrier powered by liquefied natural gas (LNG) had been completed, and that the design had received an Approval in Principle (AiP) from the Nippon Kaiji Kyokai (“ClassNK”) based on the classification society’s Rule Part GF, which adopts the IGF Code*.

With the International Maritime Organization (IMO) imposing tighter restrictions on emissions of greenhouse gases and air pollutants, the shipping industry has been increasing its focus on utilizing LNG and other “clean” fuels in place of conventional fuel oil. Against this backdrop, and utilizing technological prowess attained through building LNG carriers for many years, Kawasaki has been developing various LNG-related vessels, such as the world’s first LNG-fueled car carrier, delivered in 2016, and LNG bunkering vessels, which has culminated in an ample pool of LNG-related application technology.

Combined with additional technological innovations and knowledge developed in the course of acquiring the AiP for this bulk carrier, which complies with the latest international regulations, Kawasaki is fully equipped to proceed with its design and building, as well as to apply these technologies to other types of ships.

Moving forward, Kawasaki plans to widen its application of LNG propulsion technology in commercial vessels, and to increase its focus on building LNG-fueled vessels, for which demand is expected to grow globally in the future.

1) By configuring the LNG fuel tank behind the accommodation in the stern, the ship keeps its cargo space as large as that of conventional oil-fueled ships.

(*) The International Code of Safety for Ships using Gases or other Low-flashpoint Fuels. The IGF code took effect in January 2017 and became part of ClassNK’s rules for steel ships.

(**) Energy Efficiency Design Index (EEDI). An amendment to Annex VI of the International Convention for the Prevention of Pollution from Ships (“MARPOL,” one of the IMO treaties), became effective from January 2013, requires new ships to meet energy-efficiency levels based on the EEDI, an indicator of the amount of CO2(in grams) emitted per metric ton of freight and per nautical mile of transportation. The energy efficiency requirement is tightened incrementally from Phase 0 to Phase 3, with the baseline being determined by the dates that the ship was contracted and/or delivered. By Phase 3, bulk carriers larger than 10,000 DWT are required to achieve a 30% reduction in CO2 emissions.