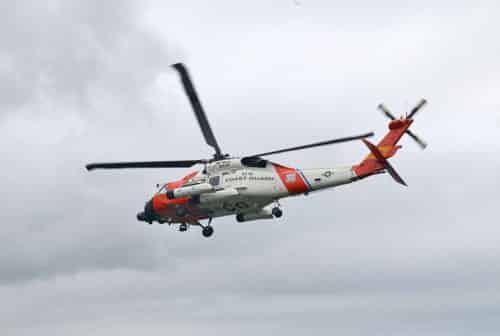 The Kona Kai safely recovered all five people from an inflatable life raft that was deployed from the Pacific 1 upon sinking. All five people were safely transported to Dutch Harbor and were reported to have been in good condition.

Seventeenth District command center watchstanders received notification from Communications Detachment Kodiak of a distress relay from the Kona Kai regarding the fishing vessel Pacific 1, which was reported to be taking on water and listing heavily with five people aboard.

After arriving on scene, the Coast Guard aircrew was able to locate the raft with all five people aboard, but due to an inflight problem, deployed a data marker buoy to mark the location and then returned to base.

“Through the coordinated and diligent efforts of the Coast Guard and the Good Samaritan vessel Kona Kai, we were able to successfully locate and bring home all five people from the sunken vessel,” said Petty Officer 1st Class Thomas Kotrba, an operations specialist and supervisor at Coast Guard Communications Detachment Kodiak. “We are extremely thankful for the local assistance in this case. This rescue is a testament to the teamwork it takes to save lives in Alaska, and we are extremely grateful.”

Weather on scene was 10 mph winds, 7 miles visibility and an air temperature of 45 degrees.