Port of Oakland getting three new cranes, could be tallest in U.S.

Towering new cranes are coming to the Port of Oakland to handle the latest generation of megaships. The Port said yesterday that its largest marine terminal would install three 300-foot-tall gantry cranes late next year. 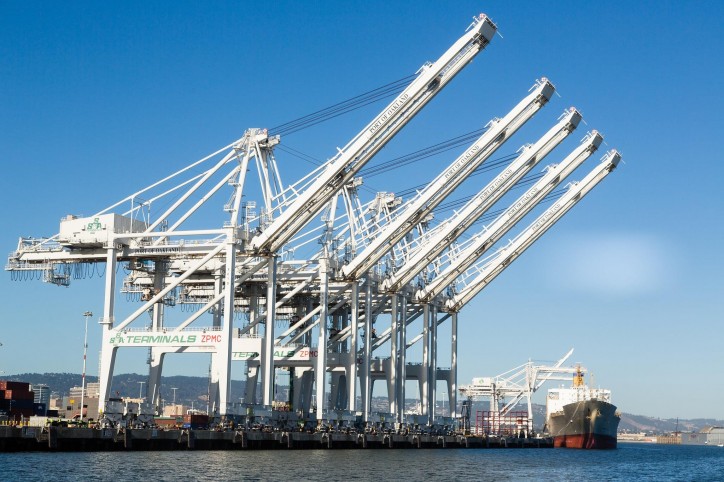 The three cranes would go to Oakland International Container Terminal on Oakland Estuary. A $30 million order for the cranes was submitted last week, the Port said. It added that the new cranes would be the tallest on the West Coast and perhaps, the nation.

The Port said the new cranes would be able to load and unload the world’s largest container ships. Megaships can be up to 1,300 feet long and carry nearly 23,000 cargo containers. Containers are stacked up to 12-high above deck on the largest vessels. Taller cranes are required to reach the top of the stacks.

“This demonstrates the faith that business partners have in Oakland as a trade gateway,” said Port Maritime Director John Driscoll. “There’s no more visible sign of a port’s growth than installing larger ship-to-shore cranes.”

SSA Terminals, the operator of Oakland International Container Terminal, ordered the cranes from Shanghai-based ZPMC. SSA said it expects the cranes to be delivered in 18 months.

The cranes, which could be 440-feet tall with booms upraised, would be delivered by ship from China.  They’d arrive only partially assembled to assure clearance under the San Francisco-Oakland Bay Bridge.

According to SSA, its new cranes would have a lift height of 174 feet above the dock.  They would be able to reach 225 feet across a ship’s deck. The terminal operator said its new workhorses would make it quicker and easier to get containers on and off vessels calling Oakland.

“Big ships are the future,” said SSA Containers President Ed DeNike.  “They’re coming to Oakland and we’re going to be ready for them.”

There are four marine terminals in Oakland loading and unloading container ships. Oakland International Container Terminal handles more than 60 percent of the Port’s total cargo volume. The terminal helped transform Oakland cargo operations over the past three years through a series of changes including:

SSA operates 10 cranes at Oakland International Container Terminal. The Port said it would remove three older cranes from the line when new ones are installed.