The 10th loading from a ship at Klaipeda LNG reloading station

On Wednesday, the LNG reloading station operated by liquefied natural gas (LNG) and oil terminal operator KN (Klaipėdos Nafta) carried out the 10th operation of reloading LNG from a gas carrier to ground storage tanks. With the global increase in the small-scale LNG market, an interest in the LNG reloading infrastructure located in Klaipėda has also been growing. 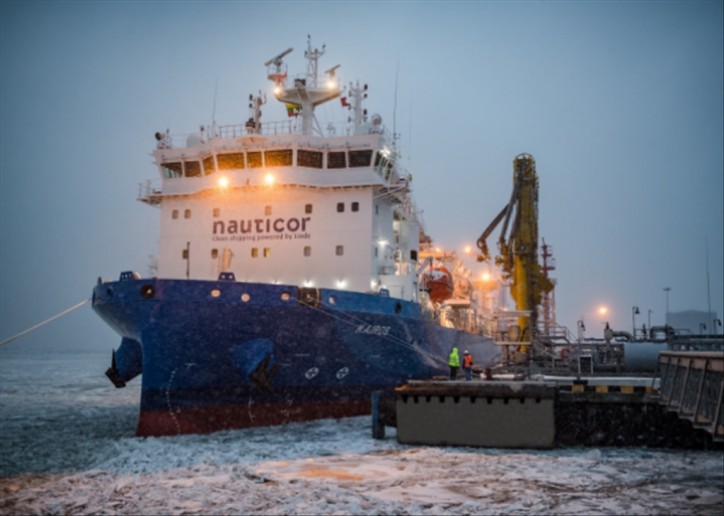 Market participants in Klaipėda have been more actively using not only the service of LNG acceptance from gas carrier ships and temporary storage, but also the service of LNG reloading to tank trucks. In 2018, tank trucks were loaded with 240 units of cargo or over 64 000 MWh of LNG, and gas was transported to Lithuanian, Estonian, Latvian and Polish clients.

“The LNG infrastructure in Klaipėda developed by KN as well as favourable global growth trends of the small-scale LNG market open up opportunities for us to generate extra revenues from commercial activities. These funds could be allocated for the reduction of costs of maintenance of the current natural gas infrastructure, thus respectively contributing to the reduction of expenses related to the maintenance of the LNG Terminal with respect to consumers,” notes KN CEO Mindaugas Jusius.

The rapid global expansion of the small-scale LNG market is opening new opportunities for the LNG reloading station in Klaipėda. According to the forecast of the international consulting company Energias Market Research, the growth of the small-scale LNG market will triple by 2030 and will mainly focus on the markets of LNG-fuelled road transport, supply for consumers not connected to gas pipelines, and LNG as marine fuel. The latter will be particularly relevant across Europe because stricter global sulphur limit regulations in shipping will become effective next year, resulting in cleaner fuel to be used in ships.

“The number of LNG-fuelled vessels, more than a half of which are used across Europe, has been rapidly increasing worldwide, and the LNG bunkering infrastructure has been developed and expanded in many ports. International analysts forecast that 2019 will be the year of expansion of the small-scale LNG business. KN has been ready to start this year – we have all necessary tools in Klaipėda to supply the cleanest marine fossil fuel with minimum emission to the sea in all Baltic Sea ports. Moreover, the services of the LNG reloading station are open to all clients; therefore, LNG can be used as a cleaner fuel alternative by all who want to use it,” pointed out Mr. Jusius.

The group of clients of the LNG reloading station is also expanded by the increasing number of operations of small-scale LNG carriers. In late January, Klaipėda LNG Terminal carried out the 20th reloading operation, and since early 2017 – the start of this type of activities – small-scale carriers reloaded almost 144 000 m3 of LNG (in 2018 – 47 200 m3).