A Russian cargo ship veered off course and bumped into a bridge off the southeast coast of South Korea on Thursday with a drunk captain on board, authorities said. 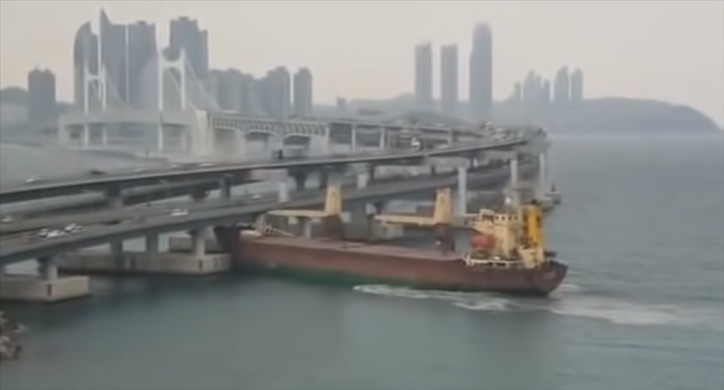 The Korea Coast Guard (KCG) said the 5,998-ton Seagrand sailed into the side of the Gwangan Bridge at around 4:20 p.m. before turning back to head in the opposite direction.

The accident caused damage to the lower part of the bi-level bridge, the KCG said. No injuries were reported, but portions of the lower bridge were closed off for precautionary reasons. The bridge will remain partially closed through Sunday.

The KCG nabbed the vessel and questioned the crew aboard. It later detained the ship's Russian captain, whose identity is being withheld, on charges of sailing under the influence of alcohol.

The KCG said the captain had a blood alcohol content of 0.086 percent, well above the legal limit of 0.03 percent and high enough to warrant the revocation of his license.

Two other members of the crew hadn't had any alcohol, the KCG said.

A KCG official said consuming alcohol aboard a vessel isn't punishable by law as long as the person doesn't steer the ship. The official added it wasn't yet clear if the Russian captain had been at the helm at the time of the accident, but he could still be charged with drunk sailing because he was still responsible for the ship, even if he hadn't been physically behind the steering wheel at the time of the accident.

The Seagrand was forced back to port by 8:20 p.m., with four patrol ships surrounding it.

Authorities were also trying to determine why the ship was heading toward the bridge in the first place, when it should have been going in the opposite direction.

The KCG said the Seagrand arrived in Busan around 9 a.m. Wednesday and unloaded 1,495 tons of iron pipes. It was bound for Vladivostok, Russia, on Thursday, carrying 1,415 tons of steel coils.

Authorities said the Seagrand had also hit a cruise ship moored at the same port about 40 minutes before hitting the bridge.

VesselFinder video representation of Seagrand movements at the time of the incident: