APM Terminals Gothenburg launched The Gothenburg Gateway this week. This will ensure that a container placed on a freight train anywhere in Sweden is loaded onto a large ocean-going vessel within 48 hours, and will shave up at least a week off the transit time to Shanghai. 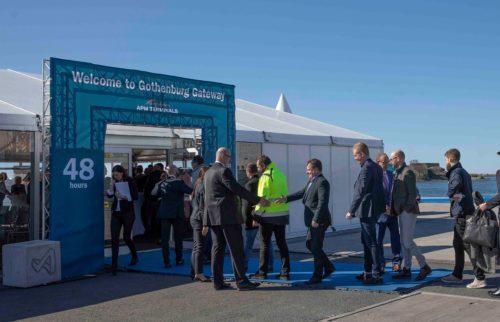 APM Terminals Gothenburg’s goal is for all parts of the country to have the same fast access to the world market. The Gothenburg Gateway, a new concept in Swedish logistics, combines:

“Via The Gothenburg Gateway it should take a maximum of 24 hours to reach Gothenburg by freight train, and a maximum of 48 hours in total to place a container on an ocean-going vessel,” says Henrik Kristensen, CEO APM Terminals Gothenburg.

“We analyzed how long it takes for a container to reach Shanghai - an important Asian market for Sweden. The Gothenburg Gateway will help reduce this time by at least one week, as well as offering an efficient and climate-smart solution.”  In the future, APM Terminals wants to service Sweden with three ocean-going vessels per week in order to provide the most competitive delivery solution.

“We now want to take the next step and further develop our port, develop logistics to and from the port, and develop logistics solutions around the port,” continues Kristensen.  “We will achieve this together with goods owners, freight lines, railway and truck operators, local and national authorities.

“The Gothenburg Gateway is a concept to ensure future growth for Swedish industry and trade,” he concludes.

During the launch of The Gothenburg Gateway, interesting ideas and plans were discussed to take Gothenburg's port to the next level. In conclusion, Axel Josefson, mayor of Gothenburg, said that he believed the initiative in Gothenburg should be given priority as the region is vital for the country's economy. He emphasised the importance of planned investments for dredging and the rail network happening as soon as possible.

Next week, the first train of Green Cargo will depart from APM Terminals own operated inland terminal in Gävle. Today, 90 percent of all goods arrive in, or depart from Sweden via ports. APM Terminals’ market share of container imports and exports in Sweden is 41 percent. APM Terminals Gothenburg recently beat Scandinavian records when 4,350 container lifts were carried out on a single call.

Source: APM Terminals (Additional information about the Port of Gothenburg at CruiseMapper)