Delta Mariner arrived at Koole (port number 4045) on 20 April. This tanker is the first 15-metre-draught vessel to arrive there. The vessel thus officially opened the deepened Nieuwe Waterweg at the Port of Rotterdam. Rijkswaterstaat and the Port of Rotterdam Authority will be removing pipelines in three remaining places this summer, which will conclude the deepening of the Nieuwe Waterweg and Botlek. 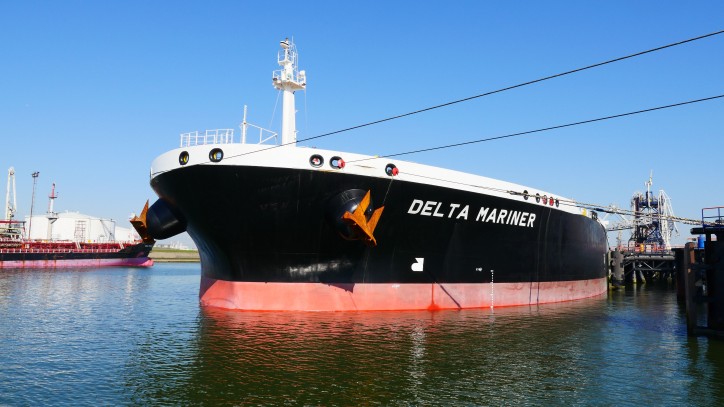 Minister Van Nieuwenhuizen (Infrastructure and Water Management): “This deepening enables us to open the Port of Rotterdam gateways even further for a new generation of sea-going vessels. Together with the Port Authority, we are investing the maritime accessibility of our Mainport Rotterdam Botlek area.”

John Kraakman, CEO Koole terminal: “The deepening enables us to better serve our clients at our terminals. It will result in further improvements in logistics as fewer ship movements will be needed. This also improves the logistics chain’s carbon footprint and lower logistics costs throughout the chain will improve the competitiveness of clients connected to us.”

Ronald Paul, COO at the Port of Rotterdam Authority: “The deepening enables Rotterdam to improve its competitive position and modernise the Botlek into an area in which the latest bulk carriers and chemical tankers feel just as at home as the largest container ships on Maasvlakte 2.”

Rijkswaterstaat deepened the Nieuwe Waterweg and the Port of Rotterdam Authority deepened the Botlek. The deepening involved three different contract depths (everything in the New Amsterdam Water Level (NAP)). The guaranteed nautical depth of the Botlek has changed from ≈ 14.5 metres to ≈ 15.90 metres. Along the Nieuwe Waterweg, the first stretch from Hoek van Holland to Maassluis has been deepened from ≈ 15 metres to ≈ 16.20 metres. 'The second section up to the Benelux Tunnel has a guaranteed depth of ≈ 16.40m. It used to be ≈ 14.5 metres. The additional 20 centimetres is required due to the lower salt content inland of the Nieuwe Waterweg which means ships need a greater water depth. After the deepening, ships with a draught of up to 15 metres, under normal circumstances, will be able to sail into the Botlek port. Ships with a draught of maximum 14.90 metres can already sail through the new Panama Canal, so New Panamax ships will be able to reach the Botlek without any restrictions.

The Nieuwe Waterweg was constructed in 1872 under the direction of civil engineer Pieter Caland and forms the final section that connects Rotterdam with the sea. At the time, the length of the breach that was cut through the dunes near what we now call the Hoek van Holland was only 4.3 km. The Nieuwe Waterweg is affected by complex currents. The canal is influenced by ebb and flood currents, flowing inland and flowing towards the sea. For this reason, the depth of the Nieuwe Waterweg must be maintained by constant dredging. The waterway was deepened over a length of 25 kilometres. From Hoek van Holland to the Benelux tunnel.

The Botlek was constructed between 1955 and 1960. This port area is mainly characterised by petrochemical industry and tank storage companies. The first company to set up here was Dow Chemical in 1956, followed in 1957 by the Cornelis Verolme shipyard. By 1961 all of the land had been allocated.

The deepening was carried out by Koninklijke Boskalis Westminster N.V. (Maassluis to the Benelux Tunnel and the Botlek) and Van der Kamp B.V. (from the Nieuwe Waterweg Maassluis to Hoek van Holland).