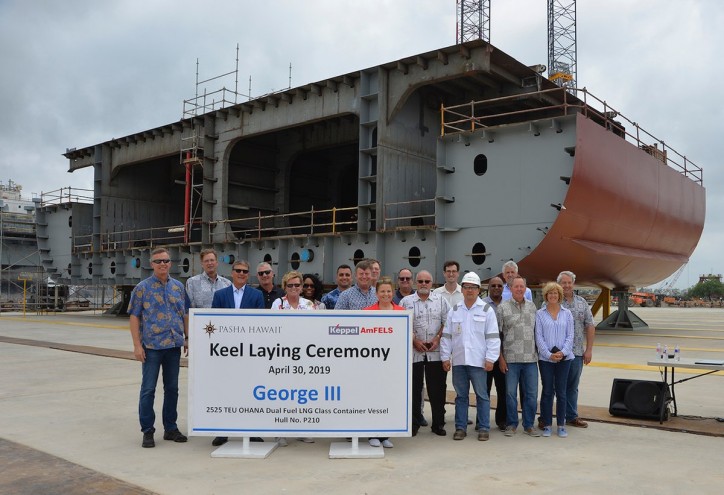 Delivery of the ‘Ohana Class vessels—named in honor of the late parents of The Pasha Group President and CEO George Pasha, IV—is expected in 2020.

“Construction of the new vessels continues to progress on schedule,” said George Pasha, IV. “These LNG-powered containerships were designed to support the needs of shippers in the Hawaii trade lane, while minimizing environmental impact in the communities we serve. Adding George III and Janet Marie to our existing fleet will greatly enhance our service capabilities and on-time delivery, marking three generations of service to Hawaii.”

The new vessels will operate fully on LNG from day one in service, substantially improving the vessels’ environmental footprint. Energy savings will also be achieved with a state-of-the-art engine, an optimized hull form, and an underwater propulsion system with a high-efficiency rudder and propeller.

“We are pleased to be able to support the Pasha Hawaii fleet with the design, engineering, and construction of the two new dual-fuel LNG containerships," said Simon Lee, President of Keppel AmFELS. "Texas currently ranks third in the nation for domestic maritime jobs, and we are proud to support a thriving skilled workforce in our local community as a leading shipyard in the region. Our team will continue to execute this project safely and efficiently.”

“Today’s construction milestones at Keppel AmFELS are real evidence of the capability we have at shipyards across the U.S. to build any kind of ship,” said Matt Woodruff, Chairman of the American Maritime Partnership. “These Jones Act ships being built at Keppel will be amongst the most modern, fuel-efficient containerships in the world, and are living and breathing proof that we have the know-how and the can-do spirit to keep America a global leader in shipbuilding innovation.”

Pasha Hawaii is a wholly o­­wned subsidiary of the family-owned global logistics and transportation company, The Pasha Group, one of the nation’s leading Jones Act shipping and integrated logistics companies, and is proud to support U.S. shipyards.