Milestone reached in the construction of new vehicle export terminal

A significant milestone has been reached in the construction of a new £15 million multi-deck vehicle export terminal at the Port of Southampton as the first phase is handed over. 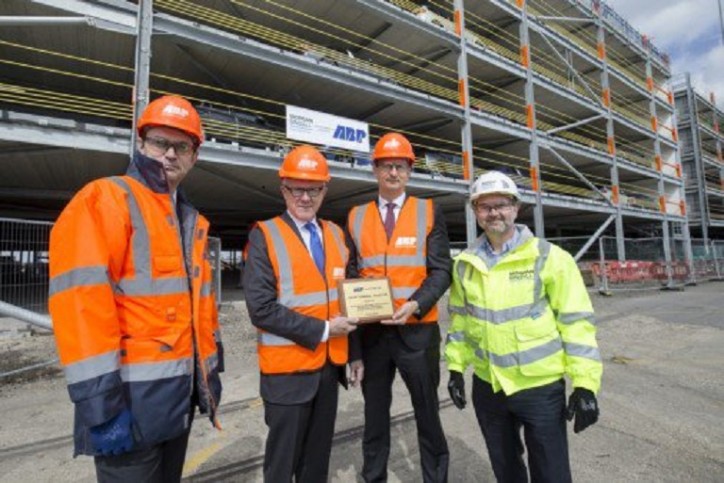 At this crucial stage of the construction, parts of deck one and two have been handed over to ABP releasing nearly 1,000 spaces for automotive import and export.

With automotive trade remaining strong at the port, the new multi-deck provides the UK’s number one automotive and export port with additional capacity for accommodating growing demand from customers.

As part of a visit to the Port of Southampton, His Excellency Mr Robert Wood Johnson, United States Ambassador to the UK, marked this significant milestone with the presentation of a plaque.

During his visit, the Ambassador also had the opportunity to witness first-hand the rich diversity of trade at the port, which connects British business and exporters to countries across the globe, including the US. Making sure this trade can continue to grow depends on ongoing investment and development at the port as exemplified by the latest state-of-the-art multi-deck vehicle terminal.

Contractor Morgan Sindall is due to complete construction of ABP Southampton’s eighth multi-deck in the Summer. Once finished, it will provide 3,000 additional spaces for automotive trade at the port.

Alastair Welch, ABP Southampton Director, said: “We continually invest in infrastructure at the port to ensure that we can continue to meet the demands of our customers well into the future.

“This investment strengthens the Port of Southampton’s position as the UK’s premier global hub for automotive trade and underlines the port’s vital contribution to keeping Britain trading.

“It was an honour to welcome the US Ambassador who clearly appreciates the critical importance of Southampton in facilitating trade between our two countries, as well as with many other countries around the world.  The visit very much reflected the port’s national and international significance.”

Source: ABPorts (Additional information about the Port of Southampton at CruiseMapper)