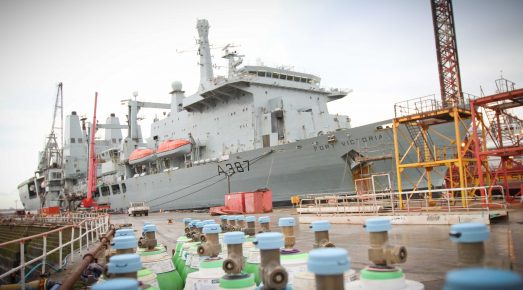 The year-long programme of work, represented phase two of RFA Fort Victoria’s life extension programme to keep her in service until 2025.

Dubbed ‘Britain’s number one pirate catcher’ after playing a key role in numerous counter-piracy operations off the coast of Somalia, the ship has rejoined the UK’s surface fleet, ready to support task group operations alongside aircraft carrier HMS Queen Elizabeth.

The latest upkeep work followed the first refit phase carried out by Cammell Laird in 2014. It was completed under the Through-Life Support contract held by the Birkenhead shipyard since 2008. Key projects included adapting the vessel’s cargo tanks to comply with environmental regulations and adding the capability to re-supply Britain’s new aircraft carriers with provisions while at sea. 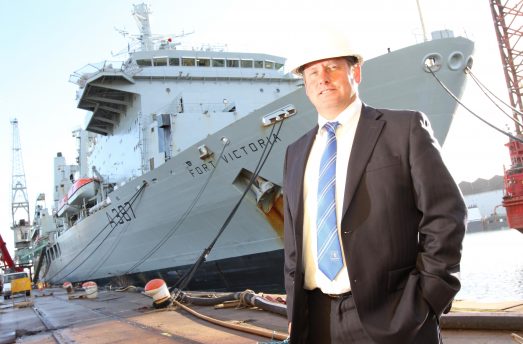 Cammell Laird project director Spencer Atkinson led both the upkeep projects for the Merseyside shipyard, the two biggest refits the RFA has ever undertaken. He said the work represented ‘a monumental achievement’ considering the timescale involved.

He said: “We had up to 400 Cammell Laird staff working on RFA Fort Victoria at one point, including upwards of 20 apprentices across all trades. Added to that, there were perhaps another 250 to 300 subcontractors.  It wasn’t possible to complete phase one and two together as the ship would have been out of service for too long, and quite simply, she’s needed around the world. The 2014 refurbishment was carried out in such a way that she could sail and be operational, and then come back for the second phase at a later date. For the past 10 years, during the lifetime of the Through-Life Support contract, Cammell Laird has been responsible for all maintenance activity on board the ship – major and minor, in the UK and abroad. Everyone in the workforce knows Fort Victoria inside out and it’s that learning from experience that saved a lot of time and ultimately ensured value for money for the UK taxpayer.

“The completion of this latest refit will deliver increased operational availability as Fort Victoria is now not only equipped to supply Britain’s new aircraft carriers but can safely navigate environmentally-protected waters in line with the latest marine regulations.  In addition, the success and ongoing high performance of Fort Victoria continues to provide valuable lessons for Fleet Solid Support. We’ve completed the project within the agreed timescale and budget, and I’m exceptionally proud of what the Cammell Laird team and our key subcontractors, Defence Equipment & Support (DE&S), and RFA ship staff have achieved.” 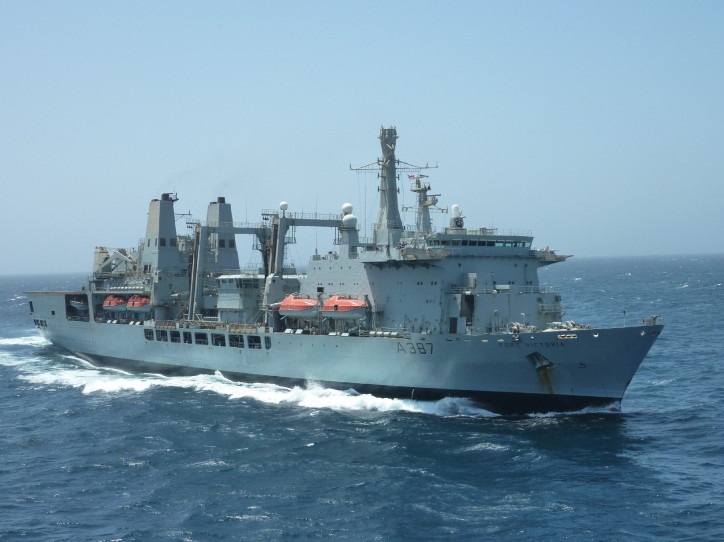 Critical tasks included upgrading the ship from a single to a double-hull tanker by adapting its centre cargo tanks to comply with International Convention for the Prevention of Pollution from Ships (MARPOL) anti-pollution regulations. Once in dry dock, holes were cut in the side of the ship and 180 tonnes of steel used to enlarge its double bottom margin, reducing the possibility of a leak if the outer hull is breached. To avoid the expense of removing the ship’s port and starboard wing cargo tanks they were converted to hold ballast water.

RFA Fort Victoria will help keep the HMS Queen Elizabeth and HMS Prince of Wales aircraft carriers supplied with solid stores – everything from food to ammunition. In preparation for this role, one of the ship’s Replenishment at Sea (RAS) rigs was modified to increase its weight capacity, allowing stores to support the carriers’ 700-plus crews to be transferred at a faster rate. The upgrade has also ensured the rig is now able to cope with the height of the carriers’ flight decks. 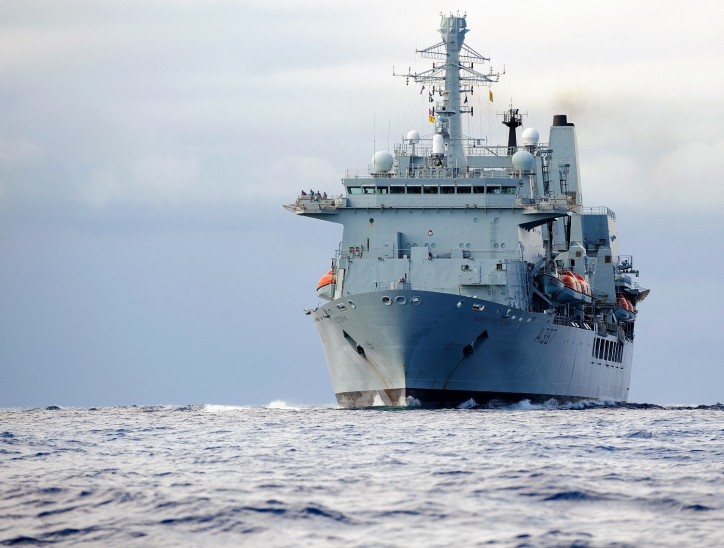 The latest refit was the last major upkeep package to be carried out under the previous RFA Through-Life Support contract. However, Cammell Laird will continue to maintain RFA Fort Victoria along with eight other ships in the RFA flotilla after securing two new 10-year support contracts worth £619 million which began in March 2019.

According to Mr Atkinson, the presence of a Through-Life Support contract paved the way for significant cost savings. Steelwork required to make the ship MARPOL compliant could be pre-manufactured, reducing the length of time the ship was out of service by around four months. As well as increasing the availability of RFA Fort Victoria, this also led to savings of at least £1.5m. 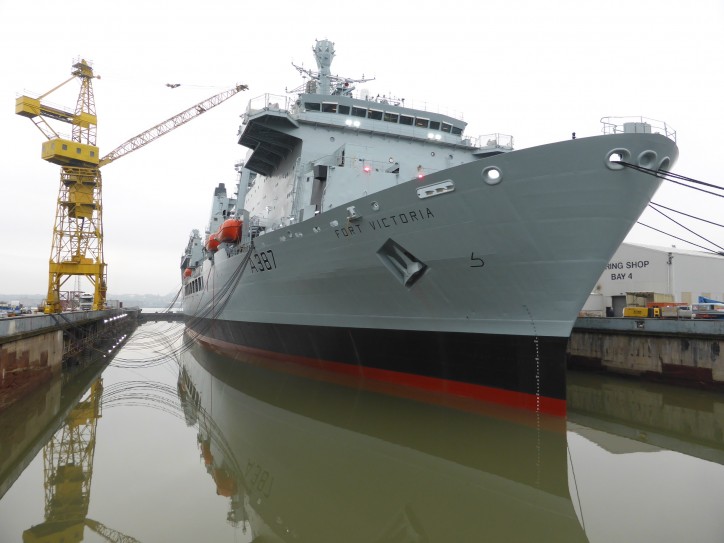 He said: “Cammell Laird is known for the quality of its steelwork and I don’t know any other yard in the UK that could undertake such a complex conversion project as the MARPOL one in the same timeframe and to the same quality. Over the years we’ve developed a very good collaborative working relationship with Cammell Laird and its main subcontractors, ships’ staff and other stakeholders. That has been the key to success.  We’re all familiar with each other’s practices and procedures – everything from environmental protection and project management to health and safety. With each new upkeep period we’re not starting from scratch and that leads to efficiencies. It’s very much a one-team approach.”

As well as making RFA Fort Victoria MARPOL compliant and providing capability to supply the Queen Elizabeth class carriers, the ship was also given a complete bridge technical refresh.

This involved the complete removal of all navigational equipment, and machinery control and surveillance (MCAS) outstations, including all electrical cables. New decking was laid, and either new or refurbished equipment installed. The refrigerated cargo holds were given a major refurbishment, as was the ship’s galley. The ship’s entire hot and cold domestic fresh water system was removed and replaced with a total length of approximately 3.5 km of non-ferrous pipework. The refit also saw RFA Fort Victoria’s forward sewage plant upgraded. 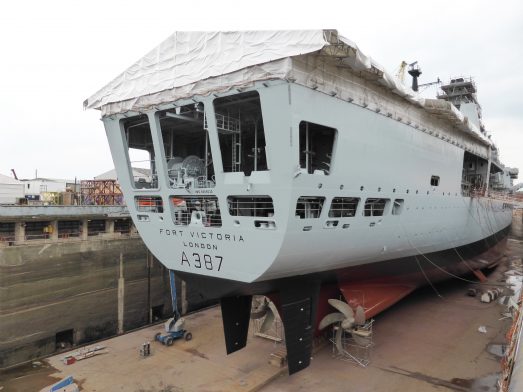 Converting the ship’s cargo tanks entailed the removal of fuel oil pipework, and the installation of ballast pipework and new tank calibration equipment.

Its wing tanks were shot-blasted and fully painted. In conjunction, major modifications were made in the cargo pump room, with pumps surplus to requirement removed to reduce the future maintenance burden.

A complete refurbishment of the tank deck saw the removal of redundant pipework, renewal of degaussing cable trays, and full scaling and painting of the deck. The ship’s RAS decks and RAS winch decks were also refurbished and completely repainted, while the RAS winch cable trays were replaced and all electrical cabling, including high voltage cabling, examined. Hudson Reel cargo pipework was replaced, and a new Fast Rescue Craft davit installed to enable the launch and recovery of Pacific 24 rescue boats.

Routine upkeep and refurbishment work was also undertaken during the year, including overhauls of the main engines and generators, classification society surveys and inspections, hull surveys, special surveys, and an overhaul of ancillary and auxiliary equipment.