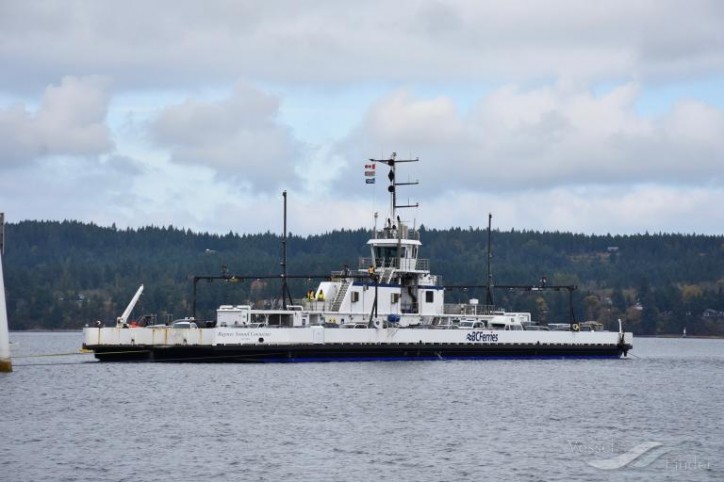 Seaspan Shipyards (Seaspan) celebrates the third successful year of service of the Baynes Sound Connector cable ferry. The vessel, built by Seaspan, has been in operation with BC Ferries since February of 2016.

Seaspan has an ongoing and long established relationship with BC Ferries and the Province of British Columbia. In addition to the construction of the Baynes Sound Connector Seaspan regularly performs maintenance, refit and refurbishment work on a variety of BC Ferries vessels. Thanks to its work on construction and maintenance contracts for BC Ferries, Seaspan is able to create and maintain hundreds of highly skilled middle class jobs in British Columbia.

With lower power requirements compared to a traditional ferry the commissioning of this vessel has enabled BC Ferries to significantly reduce fuel consumption. This has resulted in a considerably smaller carbon foot print from the route. Since entering service the Baynes Sound Connector has allowed BC Ferries to achieve more than 415,000 litres in fuel savings when compared to the traditional vessel that previously served this route.

At 1,900 meters between Buckley Bay and Denman Island, the Baynes Sound Connector currently has the longest saltwater crossing of any cable ferry in the world. At 78.5 meters long the vessel has maximum speed of 8.5 knots and is able to accommodate 50 vehicles along with 150 passengers and crew.

“The Baynes Sound Connector, built by Seaspan, has met and exceeded our expectations. Reducing our environmental footprint is a top priority for BC Ferries and we’ve seen a reduction in greenhouse gas emissions of approximately 50 per cent with the cable ferry over the traditional vessel that used to serve the route.” – Corrine Storey, Vice President and Chief Operating Officer, BC Ferries

“Seaspan Shipyards values our longstanding relationship with BC Ferries and the success of our work together on projects like the Baynes Sound Connector. We take a special pride in building and delivering vessels that exceed the expectations of our customers. We look forward to continuing this positive relationship in the years ahead as BC Ferries adds to and upgrades its fleet as the largest ferry service in North America.” – Mark Lamarre, Chief Executive Officer, Seaspan Shipyards