Port of Oakland could return to roots with bulk shipping plan

Bulk shipping operations could soon return to the Port of Oakland for the first time in 20 years. The Port said Friday it’s negotiating with a Canadian building materials shipper to transport sand and gravel. 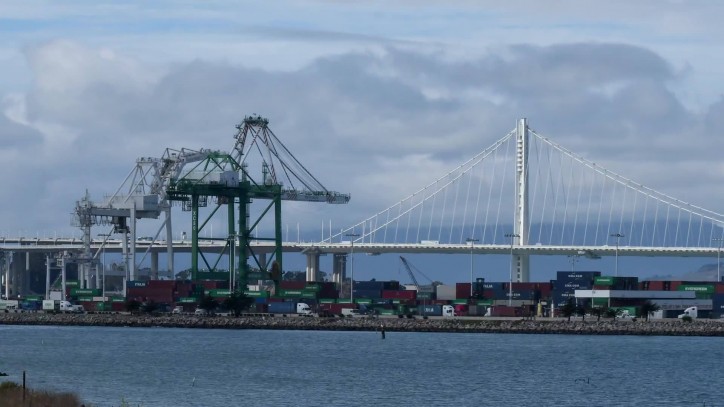 The Port’s governing Board authorized on May 09th talks with Vancouver-based Eagle Rock Aggregates. The firm seeks a vessel berth along with 20 acres of adjacent land at the Port’s Outer Harbor Terminal.

Oakland is one of the busiest container seaports in the U.S. It handled the equivalent of 2.5 million 20-foot containers last year. But the Port said a deal for bulk shipping wouldn’t hamper container operations. It explained that it doesn’t envision using the property for container handling until 2035.

The Port has nearly 1,300 acres devoted to containerized cargo. Outer Harbor Terminal is currently used for container-related activities as well as berthing for vessels in lay-up for extended periods.

“This is an opportunity for us to perhaps diversify our business,” said John Driscoll, the Port’s Maritime Director.  “We’ve built the Port of Oakland to be a global gateway for containerized cargo but a steady, divergent revenue stream could be beneficial.”

A deal to transport bulk cargo through Oakland would mark a new twist in the Port’s 92-year history.  The Port began life in 1927 handling bulk commodities loaded directly into the hold of ships. Oakland revolutionized shipping in 1962 when it introduced containerized cargo to the West Coast. With containerization, freight is first stuffed into 20 or 40-foot steel containers before loading to a vessel.

Oakland abandoned bulk in 1999 by adopting Vision 2000, a totally containerized cargo strategy.  Now it could be going back to its roots, albeit on a small scale.