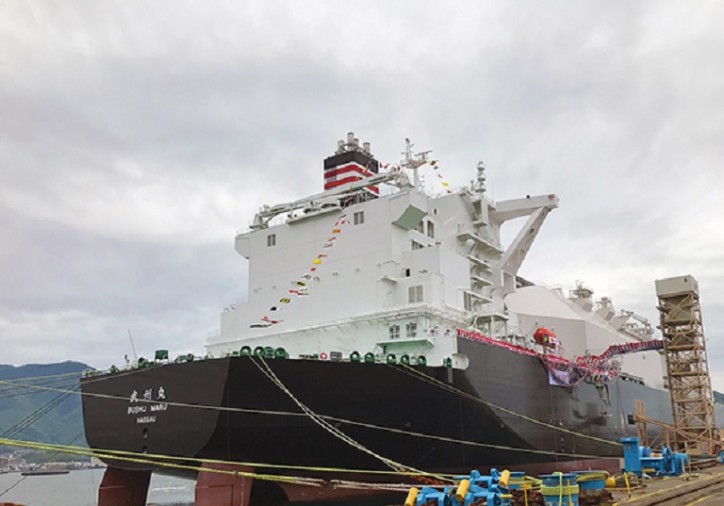 The new ship, named BUSHU MARU, is the latest model "Sayaringo STaGE" type, featuring significant improvements in both LNG carrying capacity and fuel performance due to the adoption of a more efficient hull structure and an innovative hybrid propulsion system. Completion and delivery is scheduled for June 2019, after which the BUSHU MARU will be put into service transporting LNG for the Freeport LNG Project in the U.S. state of Texas (in which JERA is participating), among other ventures.

The christening ceremony, held at the Koyagi Plant of the Nagasaki Shipyard & Machinery Works, was attended by representatives of the shipowner, along with many other guests. JERA President Satoshi Onoda announced the name of the ship, while his wife performed the ceremonial rope cutting.

The BUSHU MARU has a length of 297.5m, width of 48.94m, and depth of 27.0m, with a draft of 11.5m. Deadweight tonnage is approximately 80,300 tons, with a total tank holding capacity of 180,000m3. Launching took place on December 14, 2017. Mitsubishi Shipbuilding received the order for the new vessel from the owner, Trans Pacific Shipping 6 Limited, through MI LNG Company, Limited, a joint venture for the design and sale of LNG carriers established by MHI and Imabari Shipbuilding Co., Ltd. Construction was managed by Mitsubishi Heavy Industries Marine Structure Co., Ltd., an MHI Group company based in Nagasaki. The vessel's name is derived from the former province of Musashi (currently the prefectures of Tokyo, Saitama, and the eastern part of Kanagawa), one of the areas served by JERA. 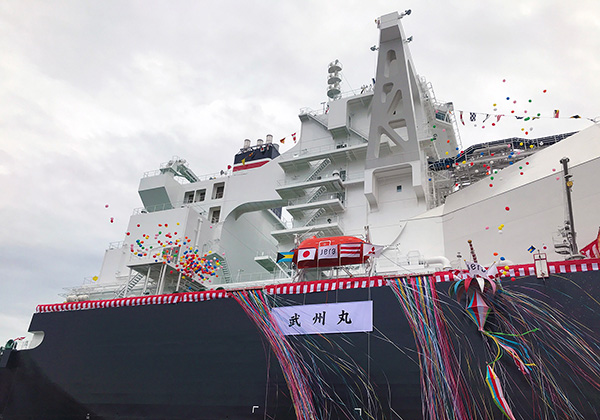 The Sayaringo STaGE is a successor to the "Sayaendo," a vessel highly acclaimed for its reliability and innovatively refined MOSS-type spherical tanks. The use of apple-shaped tanks allows for greater LNG carrying capacity without increasing the ship's width, while the hybrid propulsion system further improves fuel efficiency over the previous model.

STaGE, an acronym derived from "Steam Turbine and Gas Engines," is a hybrid propulsion system combining a steam turbine and gas-fired engines. Effective utilization of waste heat from the engines for the steam turbine provides a substantial improvement in plant efficiency, allowing for high-efficiency navigation at both low and high-speeds.