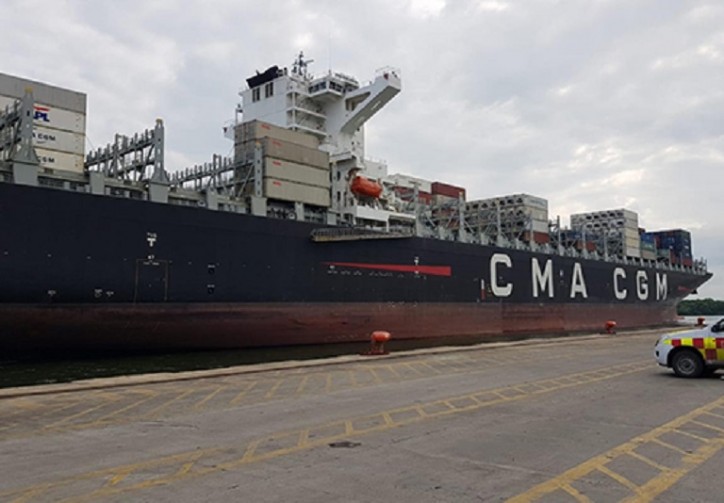 The vessel’s arrival highlights the importance of the recent dredging of the 95-kilometer main access channel leading to the country’s primary seaport.  With deeper waters, the Port of Guayaquil is the first in Ecuador to accommodate ships of this size–elevating its status as a world-class port.

“We congratulate and support the City of Guayaquil in its initiative to improve maritime access to the port. The dredging of the access channel paved the way for the arrival of these ships, which is something we look forward to as a huge boost to the local and national economy,” said José Antonio Contreras, CGSA Chief Executive Officer.

He adds:  “This also allows us to maximize our operations.  We’ve made the necessary investments in infrastructure, equipment, and technology to ensure the efficient handling of these neo-Panamax vessels.”

In October 2018, the City of Guayaquil granted Luxembourg-based Jan De Nul Group a 25-year concession for the dredging and maintenance of the port’s access channel.  The Ecuadorian government is also working on the Southern Viaduct Project, which will connect the port to El Oro province and the southern part of the country via a new road and two bridges.  Upon completion, these projects will further improve access to the port to pave the way for more robust trade opportunities for the region.

Currently, CGSA is Ecuador’s top trade facilitator for banana, shrimp, fish, cocoa, and wood; as well as the importation of raw materials, general merchandise, goods, and finished products for consumption.  Nearly 85 percent of the country’s imports and exports pass through Guayaquil, due in part to its proximity to agricultural and export zones.

Source: ICTSI (Additional information about the Port of Guayaquil at CruiseMapper)