A loud blast in the early morning yesterday shook the Chittagong shipbreaking area. At around 8:30 AM, a fire broke out on board the vessel BUNGA KELANA 4 (IMO 9178343), beached at Mahinur Ship Breaking yard, also known as Premium Trade Corporation. The flames spread from abandoned waste oil located close to the engine room where workers were torch-cutting steel parts. 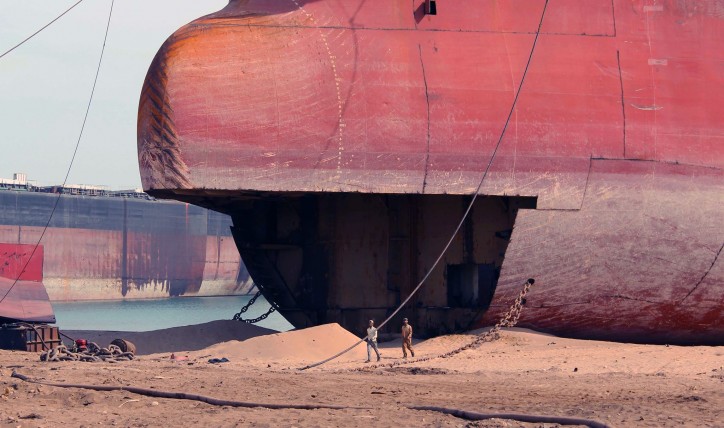 Mohammod Rubel, 25 years old cutterman, lost his life in the accident. He died on his way to the hospital. Hamidul Islam’s dead body was found on the ship several hours after the explosion. Five other workers, aged 19-30, suffered severe burn injuries and are now being treated at the Chattogram Medical College Hospital. The condition of one of them is extremely critical. Local sources report that several workers might still be missing.

Video footage from the accident shows that there was no emergency response equipment available at the yard. Barefoot workers without protective gear are seen carrying the injured. Bangladeshi organisation OSHE, member of the NGO Shipbreaking Platform, reports that the death of a worker, Tara Miya, was covered up in the same yard just a few days ago.

"The conditions at Mahinur Ship Breaking are shocking and unfortunately telling of the overall appalling working conditions at the Bangladeshi shipbreaking yards. Workers are exposed to enormous risks because there is no infrastructure available on the beach to ensure safe working conditions and rapid emergency response." - Ingvild Jenssen - Executive Director and Founder - NGO Shipbreaking Platform

The BUNGA KELANA 4 was beached at Mahinur Ship Breaking six months ago. It was owned by Malaysian shipping company AET Tankers, a wholly owned subsidiary of MISC, the leading Malaysian energy logistics company listed on the Malaysia stock exchange. In 2018, AET Tankers sold four vessels for scrapping on the beaches of South Asia. Three ended up in Bangladesh; one was beached in India.

Before its final voyage, the vessel changed its name to KELANA 4, and its Malaysian flag was swapped to that of Comoros. These are clear indicators that the vessel was brought to the beaching yard with the help of a scrap-dealer known as cash buyer. The use of black- and grey-listed flags, such as Comoros, Palau and St Kitts and Nevis, as well as anonymous post-box companies to register the ships, renders it very difficult for authorities to trace and hold ship owners liable for illicit business practices that cause the loss of life, injuries and irreparable damage to the environment.

The explosion on the BUNGA KELANA 4 follows another recent tragic event that took place in February, when two workers were killed by a fire on board a tanker owned by Greek Polembros Shipping. In the last ten years, hundreds of workers have lost their lives and suffered severe injuries due to dirty and dangerous shipbreaking practices in Bangladesh. Many more suffer from exposure to toxic fumes and materials that are embedded within the ships’ structures.

Breaking apart ships on tidal beaches also causes irreparable damage to the environment. Only a day prior the accident it was revealed that another shipbreaking company, BBC Ship Breaking, had been given the permission by local authorities to wipe out a protected mangrove forest in order to establish a new yard. Following the filing of a complaint by Platform member organisation BELA, the High Court imposed a six months’ stay on the lease contract and have asked the local authorities to explain why they blatantly ignore national forest protection laws. In 2009, 14.000 mangrove trees were illegally cut to expand the shipbreaking activities in Chittagong.

"It is high time for the Bangladesh government to regulate their shipbreaking industry and put a halt to the systematic violations of national labour and environmental protection laws. This latest tragic explosion adds to the shipping industry’s appalling toll on human lives and should act as a wake-up call for the financiers and customers of shipping to demand recycling practices off the beach and in line with the standards set by international waste laws and labour conventions." - Ingvild Jenssen - Executive Director and Founder - NGO Shipbreaking Platform