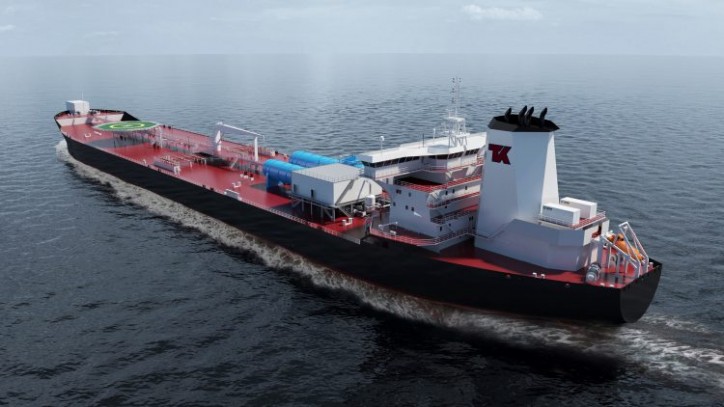 The shuttle tankers are all equipped with a new innovative technology developed by the maritime supplier Wärtsilä in cooperation with Teekay, resulting in zero volatile organic compounds (VOC) emissions from the tankers.

On behalf of the Norwegian Government, Export Credit Norway and GIEK have provided loan and guarantee of USD 165.5 million. The financing is part of a larger syndicate involving several commercial banks and a foreign export credit agency. In addition, Enova, which contributes to Norway’s transition towards a low emission society, has granted subsidies of NOK 133 million to these four shuttle tankers.

"It is gratifying that this innovative new technology developed in Norway has led to trade. This project includes many Norwegian subcontractors and contributes to the restructuring of the Norwegian economy, value creation as well as keeping employment in Norway," says Mr. Torbjørn Røe Isaksen, the Norwegian Minister of Trade and Industry.

The environmental impact of VOC is significant and the Norwegian Government imposed restrictions on these emissions already back in 2003. The new VOC recovery system developed by Wärtsilä reduces VOC emissions by up to 100 percent, converts the emissions into liquid gas, and feeds the gas into a VOC fuel tank as a secondary fuel for the vessels. This provides an annual fuel bunkering reduction of up to 3000 tons of LNG Combined with other energy efficiency features of the vessels, the total reduced bunkering requirement and CO2 reduction amounts to 50 percent compared to the existing fleet. Additionally, NOx and SOx emissions are reduced by more than 80 and 95 percent, respectively.

The new tankers, scheduled for delivery from Samsung in 2019-20, also include top-end equipment from other Norwegian suppliers such as Brunvoll, MacGregor Pusnes, Kongsberg, Jotun, Glamox and several others.

"We are excited to have received long-term financing from the Norwegian Government for our latest generation of shuttle tankers. These vessels will be the most environmentally friendly shuttle tankers ever built. What makes me particularly proud is that bunkering requirements and CO2 emissions will be reduced by approx. 50%, thereby reducing the environmental footprint of our operations significantly, says Ingvild Saether, President & Chief Executive Officer, Teekay Offshore Group Ltd.

The shuttle tankers have received the Tanker Shipping & Trade Environmental Award 2018 and 2019 Rystad's Green Initiator of the Year Award. Nominated as one of the top four candidates for the Next Generation Ship Award 2019.