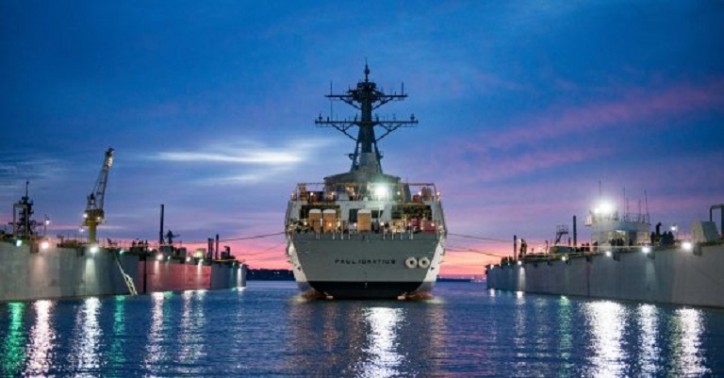 “We are honored that the U.S. Navy recognizes that Port Everglades can meet their unique needs,” said Broward County Mayor Mark Bogen. “For 29 years, Fleet Week Port Everglades was produced as a signature annual event for South Florida, as well as the Navy, Marines, Coast Guard, and for the nation, bringing tens of thousands of visiting military personnel and guests to our community. We are proud that our community will host this important ceremonial event in the life of a new Naval warship.”

Broward County Transit will also waive bus fares for the military crew of the ship during their call in Port Everglades.

Named after the 59th Secretary of the Navy (1967-69) during President Lyndon Johnson’s Administration and a distinguished World War II veteran, the USS Paul Ignatius (DDG-117) is the Navy’s 67th Arleigh Burke-class destroyer and will debut the latest technology and weapon systems with the most advanced combat capabilities. At 513 feet long and 66 feet wide, with a displacement of approximately 9,200 tons, her propulsion system will drive it to speeds in excess of 30 knots, and she will accommodate a crew of 304 Sailors. This commissioning will have greater historical significance because Secretary Ignatius, who resides in Washington, D.C., plans to be present for the ceremonies, making the USS Paul Ignatius the first destroyer to be commissioned with the honoree present.

“We are looking forward to the ship’s commissioning at a place that has a history of a warm, military-welcoming community,” said the ship’s Commanding Officer, Commander Robby Trotter. “Only a handful of ports in the nation have the experience associated with holding an annual Fleet Week tradition, the type of experience needed for a new military vessel’s commissioning.”

Mary Anne Gray, executive director of Broward Navy Days, Inc., the organizers of the annual Fleet Week Port Everglades, is serving as chair of the USS Paul Ignatius Commissioning Committee that includes Port Everglades, the Fort Lauderdale and Broward County Councils of the Navy League, and representatives of numerous other local organizations. The Commissioning Committee is working with the Department of the Navy to plan the ceremonies and welcoming activities for the ship’s inaugural crew.

“South Florida has a special bond with each of the ships that have been commissioned here, and we know that this will be the start of a long relationship with the USS Paul Ignatius and her future crews,” chair Gray said. “There are many opportunities to become involved and support the commissioning of this incredible ship, and we encourage the public to get involved.”

Source: Port of Everglades (Additional information about the Port Everglades at CruiseMapper)