The Evergreen Triton, with a capacity to handle 14,424 Twenty-foot Equivalent (TEU) containers, arrived Friday (May24) at the Helen Delich Bentley Port of Baltimore becoming the largest container ship to ever visit Maryland. The supersized ship was able to call the Port of Baltimore because of the Port’s infrastructure that allows it to handle some of the largest ships in the world. 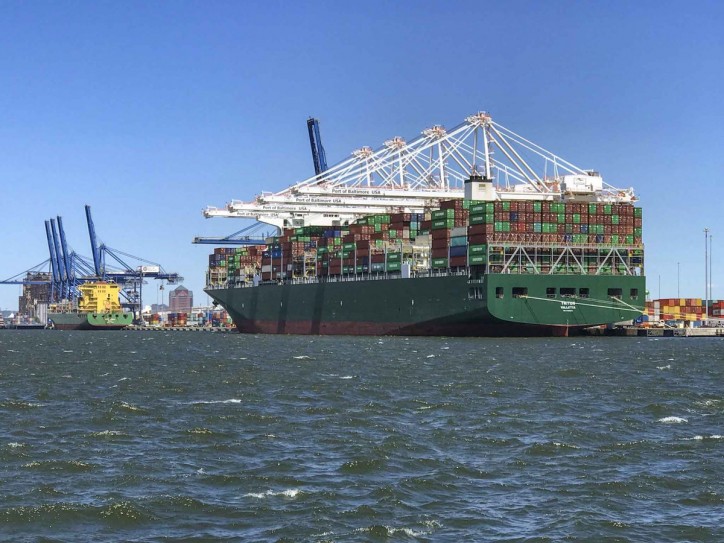 “Thanks to Maryland’s investment in a 50-foot berth, every year we are seeing larger and larger container ships choosing the Port of Baltimore,” said Governor Larry Hogan. “Maryland truly is open for business. The Port of Baltimore fuels the state’s economy and supports thousands of jobs throughout the freight industry.”

Previously, the largest container ship to visit the Port of Baltimore was the 11,000-TEU container ship Gunde Maersk, which arrived at the Port of Baltimore in October. Thanks to a public-private partnership between the Maryland Department of Transportation Maryland Port Administration (MDOT MPA) and Ports America Chesapeake, the Port of Baltimore is one of the few ports on the East Coast to have a 50-foot deep channel and a 50-foot deep berth necessary to accommodate the mega-ships traveling through the recently expanded Panama Canal. Ports America Chesapeake operates Seagirt Marine Terminal, the Port’s container terminal.

“We are very happy to welcome our largest ever container ship, the Evergreen Triton, to the Port of Baltimore,” said MDOT Maryland Port Administration Executive Director James J. White. “Under Governor Hogan’s leadership, we are well positioned to continue to welcome ships of this size and make the necessary infrastructure improvements to grow our port and support Maryland being open for business.”

In December, MDOT MPA and Ports America Chesapeake announced a $32.7 million project to develop a second 50-foot-deep container berth at Seagirt Marine Terminal. When completed, this second berth will allow the Port of Baltimore to handle two supersized container ships simultaneously. Construction on the new berth is expected to commence by the end of 2019. The berth is expected to become operational by early 2021.

The Port is responsible for nearly $3.3 billion in personal wages and salaries, $2.6 billion in business revenues, and $395 million in state and local tax revenues. The report also determined that the Port continues to deliver good-paying jobs with the Port’s average annual salary for the direct job holder being 9.5% higher than the average annual wage for the state of Maryland. The Port of Baltimore is coming off a record-breaking year in 2018. A record 43 million tons of international cargo was handled last year by the combined state-owned public and the privately-owned marine terminals. That surpassed the previous high mark of 40.9 million tons in 1974. The value of the cargo passing through the Port in 2018 was also a new benchmark: $59.7 billion, surpassing the previous $53.9 billion set in 2017. The Port’s state-owned public terminals handled a record 10.9 million tons of general cargo last year marking the third consecutive year exceeding the 10-million-ton plateau. In 2018, the Port handled 1,023,152 TEU containers marking the first year ever it had exceeded one million. The Port also handled a record 850,147 cars and light trucks in 2018, the most in the U.S. for the eighth consecutive year.

The 43 million tons in 2018 was enough to move the Port of Baltimore up one slot in cargo handled to 11th among major U.S. ports, and the $59.7 billion total cargo value ranked ninth nationally. Among the nation’s ports, the Port of Baltimore ranks first for autos and light trucks, roll on/roll off heavy farm and construction machinery, imported sugar and imported gypsum. The Port ranks second in exported coal.