On Wednesday, May 29, 2019, the Port of Corpus Christi celebrated the commencement of the Port’s Ship Channel Improvement Project, marking a historic milestone in America’s progress to becoming the net exporter of energy. 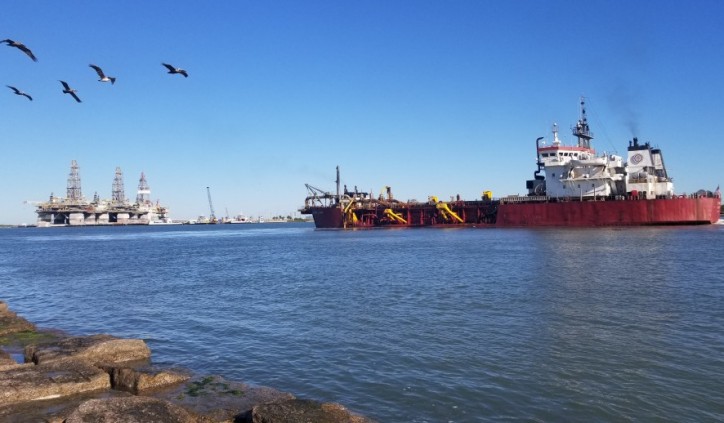 The Port of Corpus Christi’s CEO Sean Strawbridge spotlighted the first dredges in the Gulf, as U.S. dredging contractor Great Lakes Dredge & Dock’s CEO Lasse Petterson kicked off the highly anticipated Channel Improvement Project, an undertaking that will deepen and widen the Corpus Christi Ship Channel from 47 to 54 feet and widen it from 400 to 530 feet.

Port of Corpus Christi Chief Executive Sean Strawbridge called the Wednesday morning event a moment more than 20 years in the making. Operators of the South Texas waterway began the federal application and funding process for the dredging project in 1990.

“We are building and enhancing infrastructure and collaborating with new partners as we prepare to accommodate major growth in crude oil production,” Mr. Strawbridge said.

Following a 40-year ban on crude oil exports, in Dec. 2015 the Port of Corpus Christi exported its 1st shipment of crude oil. In 2018, the Port exported $10.8 billion of oil helping the U.S. with balance of trade.

The first phase of dredging will begin upstream of the Port Aransas Ferry Landing and extend approximately 7.6 miles into the Gulf of Mexico. It is estimated that GLDD dredges will remove approximately 6.6 million cubic yards of dredge material from the waterway.

Lasse Petterson, of GLDD said his company is proud to have won the initial phase of the Corpus Christi Deepening Project. “We have worked well with the Galveston District of the Army Corps of Engineers District Commander Colonel Lars Zetterstrom, he said.

“We also congratulate the Port of Corpus Christi and CEO Sean Strawbridge on the start of this important project. It has been a long time coming, but we know ‘it all starts with dredging’,” Mr. Petterson concluded.

Currently, the Port of Corpus Christi is the number one exporter of U.S. crude oil in the nation. Around 500,000 barrels of crude oil comes through the port a day. Once completed, the ship channel will be able to support two-way traffic of supertankers capable of carrying up to 2 million barrels of crude oil and refined products per ship. In addition to crude oil, the port facilitates the import and export of liquefied natural gas, wind turbine equipment, military cargo, and grain sorghum. Port officials expect a $39 billion economic impact as soon as everything is complete.