Eesti Gaas started bunkering in the port of Helsinki

Elenger, the subsidiary company of the Eesti Gaas group operating in foreign markets, started LNG bunkering in the port of Helsinki. The ship being bunkered is the same that Eesti Gaas bunkers in the port of Tallinn, the shuttle Megastar, which cruises between Helsinki and Tallinn. 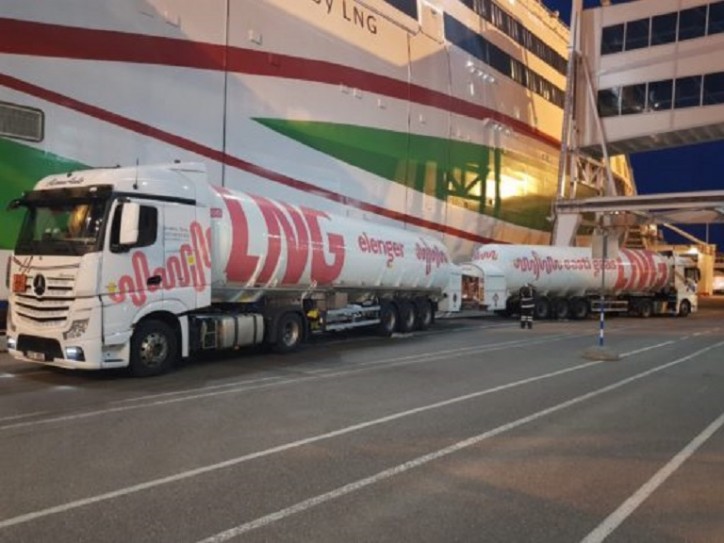 “While LNG bunkering is rather a rare sight in the port of Helsinki these days, it is bound to become one of routine operations in the nearest future: LNG will eventually replace diesel fuel among marine fuels, which will contribute to cleaner air and cleaner Baltic Sea,” Jarko Alanko, the CEO of Elenger Finland, noted.

Captain Tarvi-Carlos Tuulik, Head of Ship Management at Tallink Group, says that the most important word in the shipping industry of the 21st century is “sustainability”. “As far as sustainability is concerned, Tallink Group is one of its pioneers not on the Baltic Sea alone but on the European scale. We have already decreased our footprint on board and onshore compared to what it was before, and we keep working every day to reduce it further in the future for a lower environmental impact,” Tuulik noted.

Tallink’s Megastar will be truck-to-ship bunkered in the port of Helsinki once a week, every Tuesday, within one hour in the evening. Elenger primarily delivers LNG to the port of Helsinki from the new Novatek’s LNG plant in Vysotsk, which was commissioned with the assistance of Elenger experts.

A security zone within 30 metres of the bunkering site, which unauthorised persons are prohibited from accessing, will be established in the port of Helsinki during each bunkering operation. In order to completely eliminate the risk of sparks being produced electricity in the security zone will be switched off during the bunkering. The quick couplings used for bunkering guarantee that the process is entirely leak-free. Such safety measures are based on the extensive risk assessment performed in the winter.

Eesti Gaas supplies its clients with LNG from Russia, Finland, and Lithuania. Last year, Eesti Gaas supplied over 16,000 tonnes of LNG from its various procurement sources while the amount supplied a year before had been 12,300 tonnes.  The company has procured special semi-trailers for the purpose of LNG transportation and bunkering. By now, Tallink’s vessel Megastar has been truck-to-ship bunkered with LNG in the port located in the centre of Tallinn more than 1600 times.

LNG (liquefied natural gas) is characterised by very high energy content, and it can be used where natural gas pipelines are not available. LNG is used in energy production as well as land and marine transport. It is an environmentally friendly fuel which allows the content of carbon dioxide, SOx and NOx in emissions to be reduced remarkably and produces almost no soot particles.

Currently, the Dutch shipbuilding company Damen is building a unique LNG bunkering vessel for Eesti Gaas. The ship is to render services in the northern and eastern part of the Baltic Sea. It will be completed in 2020 and start bunkering environmentally friendly vessels operating in the Gulf of Finland.

Eesti Gaas runs the largest gas supply network in Estonia and also operates in Finland and Lithuania. The group has a total of 50,000 clients and 240 employees. In addition to supplying customers with natural gas through pipelines, as CNG, and LNG, the company sells electricity and specializes in the development of various energy production solutions.

Source: Eesti Gas (Additional information about the Port of Helsinki at CruiseMapper)