Incat Tasmania has launched a new 111-metre ferry from the shipyard at Hobart’s Prince of Wales Bay.

The ship, named Volcan de Tagoro (Incat Hull 091) and in the distinctive red Naviera Armas livery, was launched on the high tide at 6.30 pm Saturday 15th June.  Sea trials for the vessel are scheduled to commence in the first week of July. 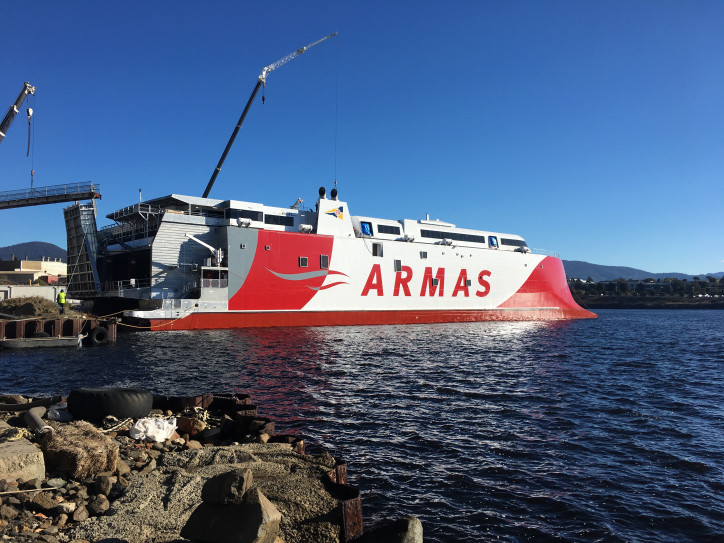 Being outside the shipyard will allow Incat’s engineering team to start engines and generators, commission all the machinery items and install roof mounted radars and other equipment.

Naviera Armas SA will operate the vessel on Spanish routes, including the Canary Islands.  The company has an extensive fleet of vessels, and Volcan de Tagoro will be the fifth Incat vessel operating in the Armas fleet, however is their first newbuild from Incat Tasmania. The ship’s crew will soon arrive from Spain to observe the vessel operation during trials in readiness for departure to her new Spanish home later in July.

Volcan de Tagoro has capacity for 1200 persons, including crew, and the expansive vehicle deck allows for almost 600 TLM (truck lane metres) plus 219 cars, or in car-only mode accommodates 401 cars.   The ship is powered by four MAN 20V diesel engines driving Wartsila waterjets, and although speed trials have not yet been conducted, Incat predicts the vessel will have a top speed in excess of 40 knots.

Incat CEO Tim Burnell said: “The contract, in excess of A$100 million, has been keeping more than 600 Incat employees busy for the past two years. This is the second large wave piercing catamaran to be launched at the Prince of Wales Bay site in just six months, following the December 2018 launch of Virtu Ferries 110‑metre vessel, and we are very proud of the excellent workmanship and product we are about to deliver”.

Incat is continuing construction of three other vessels at the shipyard; the next launch later this year will be a 35‑metre commuter ferry for service between Geelong and Docklands in Melbourne, followed by a 100-metre ship for Trinidad and Tobago in 2020 and another 111-metre ship for a European operator in 2021.

Incat has also signed a contract for construction of a 130‑metre vessel for South American operator Buquebus and design work is well advanced on that ship.