That was how Peter Stephenson, founder and Executive Chairman of Able UK, described the successful arrival at Able Seaton Port of the giant 25,000 tonnes Brent Bravo oil rig platform in preparation for its dismantling and recycling. 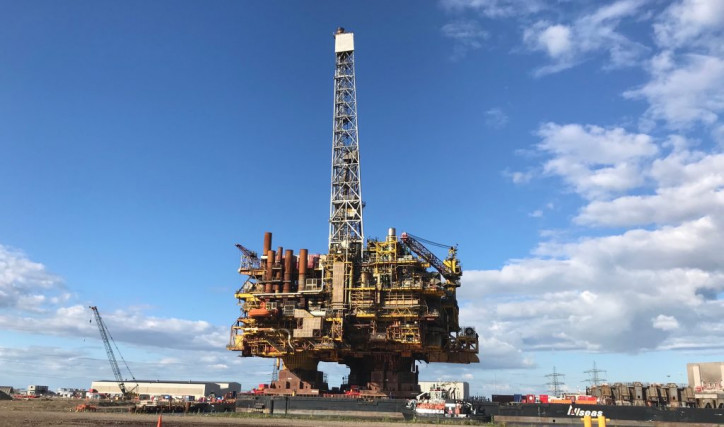 The Brent Bravo, which stands 410ft tall and 230ft wide, is the second platform from the Shell Brent field to be decommissioned at Able Seaton Port—the first, the Brent Delta, arrived in May 2017. Both were transported from north-east of Shetland by the Allseas Pioneering Spirit, one of the largest vessels ever built.

After arriving off the North East coast, the Brent Bravo was transferred to a 200-metre long barge, the Iron Lady, for the final part of the journey to Able Seaton Port where it is currently moored on Quay 6. Next week the final manoeuvre will see the platform ‘skidded’ on to the multi-million-pound demolition pad which forms part of what is probably the strongest quay in Europe.

Said Mr Stephenson “The Brent decommissioning project is the most significant project of its type to date and the fact that Able was selected against an initial longlist of 131 potential disposal yards demonstrates the reputation we have established through our long track record of working with many of the world’s major offshore energy companies.

“As with the Brent Delta, this operation has involved one of the heaviest lifts ever undertaken and is a success for everyone involved, especially our partners Shell and Allseas.

“Once again the Brent Bravo will provide a spectacular addition to the Teesside skyline for some time as we undertake the decommissioning programme with the aim of recycling over 98 per cent of the structure.”

Able invested £28million in constructing this new facility, including one of the strongest quays in Europe, to meet the requirements for handling the Brent platforms—and putting the company at the forefront of the growing demand for decommissioning platforms as they come to the end of their operational lives.

During 2020 Able Seaton Port will welcome a number of other new large-scale projects including the next element of the Shell project – the Brent Alpha – as well a series of platforms and structures from the ExxonMobil operated Sable Offshore Energy Project (SOEP) off the coast of Nova Scotia, Canada.

Furthermore, from September 2020, Able Seaton Port will be the installation base for the 90 turbines that will comprise the Triton Knoll offshore wind farm.Peter Stephenson commented: “We have invested very significantly over the last few years and we are now seeing the results. There is a certain synergy in being engaged with the end of life process for parts of the oil and gas sector whilst also being heavily involved with the development of offshore wind farms as the new focus for power generation. We look forward to continuing to attract these activities to the Tees and hopefully this will include to our recently proposed development at South Bank.”