Gasum’s liquefied natural gas (LNG) bunker vessel, Coralius, made its first bunkering in the port and refining area of Rotterdam, one of the most important logistics hub in Europe. A milestone of her ship-to-ship bunkering history is reached when proving her availability in the ARA (Amsterdam-Rotterdam-Antwerp area). Liquefied natural gas (LNG) was supplied to the vessel Bit Viking. 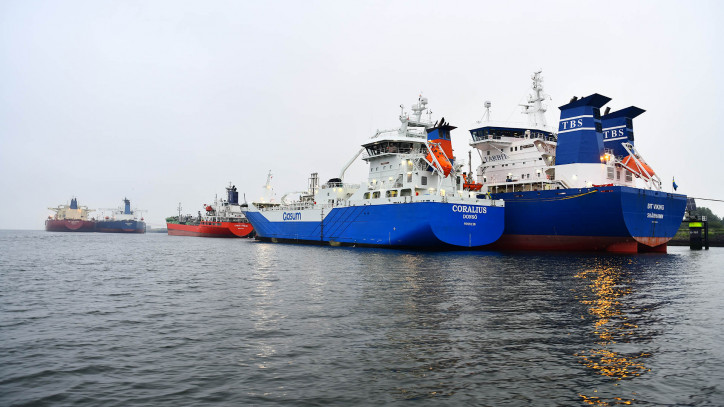 “It’s time to celebrate,” says Kimmo Rahkamo, Vice President, natural gas and LNG, Gasum. “Finally, being able to bunker our clients in the ARA area increases LNG availability and security for the LNG fueled fleet. The amount of LNG driven vessels is growing rapidly globally, and we will definitely be part of the growth in being present where LNG is needed,” he concludes.

Coralius has her main operation area in the North Sea and the Skagerrak area. End of February she celebrated another milestone as she completed her 100th bunkering operation in just 18 months. Coralius delivers LNG through ship-to-ship bunkering at sea and in port. This has significantly increased Gasum’s flexibility and responsiveness to vessels that require LNG but are unable to visit a terminal or a port. By making LNG more accessible to vessels, ship-to-ship bunkering also boosts efficiency.

“We are happy with this opportunity to get LNG by ship-to-ship bunkering also in the Port of Rotterdam. Our vessel Bit Viking converted to LNG already in 2011. Since then we have operated on LNG about 97% of the time, mainly supported by Gasum. We would like to continue on this path and consequently we are depending on reliable and flexible LNG supplies,” says Anders Hermansson, Technical Manager of Tarbit Shipping.

Gasum foresees an increase in the average amount of delivered stem, as it will perform bunkerings on shuttle tankers and other bigger vessels.  Coralius has increased its efficiency due to LNG bunkering operations becoming faster – they are now nearly as quick as conventional oil bunkerings, which has also increased customer satisfaction.

LNG marine fuel meets all current SOx (sulphur oxides) and planned NOx (nitrogen oxides) requirements. It eliminates particles and can reduce CO2 emissions by at least 20% compared to traditional fuels. LNG is suitable for all vessel types and it contributes significantly to a greener shipping environment.