The Port of Vancouver USA received the largest single shipment of 198 wind turbine blades in Vestas history this week, breaking the previous record of 156 blades on a single ship. The unprecedented delivery which arrived at the port Monday, June 24, is a joint effort between blade manufacturer Vestas and project owner PacifiCorp. The special “repowering”blades will increase production at PacifiCorp’s Marengo Wind Project near Dayton, Washington by more than 35 percent. 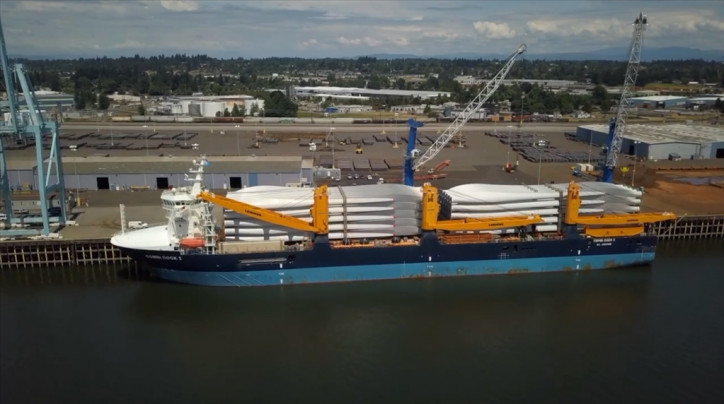 “We are grateful for our partners including ILWU Local 4, Local 40 and Local 92,” said Chief Commercial Officer Alex Strogen. “We also thank Jones Stevedoring, Transmarine and Combi Dock. Their talent, expertise and hard work are integral to the port’s continued commercial success.”

The 198 blades, each measuring 49 meters (161 feet) in length, were manufactured in and shipped from Italy.

“With our North American headquarters based in Portland, it is especially gratifying to be part of bringing the environmental and economic benefits of wind energy to the Pacific Northwest,” said Vestas North America President Chris Brown. “The arrival of this shipment and its 198 blades represent the significant supply chain industry and jobs created and supported by the wind energy economy.  We’re proud to partner with PacifiCorp and the port to bring more wind energy benefits to Washington.”

As part of its Energy Vision 2020 plan, PacifiCorp is increasing the wind energy it generates for its 1.9 million customers by more than 50 percent by repowering its existing wind fleet with new technology and bringing 1,100 megawatts of new clean wind energy projects online by end of year 2020. The $3 billion investment supports local economies and brings jobs to rural communities.

“We’re excited to bring this upgrade to the Marengo Wind Project near Dayton, a town that’s helping to grow clean, renewable energy right here in our region,” said Tim Hemstreet, Managing Director for Renewable Energy at PacifiCorp. “By using the latest technology to repower these existing wind turbines, we’re able to deliver to our customers a boost of clean, wind energy while keeping energy costs low.”

The Marengo Wind Project currently generates enough renewable energy to supply 53,000 average Northwest residences annually. The large blades and advanced technology will allow each turbine to generate over 35 percent more energy—helping to power 72,000 homes a year with the same wind fleet and amount of wind.

Once unloaded from the ship, the blades will be moved to laydown space at the port’s Terminal 5. From there, they will be transported by truck to the Marengo Wind Facility over the next few months.

The port looks forward to welcoming an additional vessel from Vestas in August, which will nearly meet the previous record by carrying 153 blades and 11 hubs.

The Port of Vancouver USA has long been a leader in the port industry in supporting renewable energy projects and is one of the West Coast leaders in the movement of wind energy components to support new and existing wind energy projects.