Dutch towage company and maritime services provider Multraship Towage & Salvage has carried out christening ceremonies at its home port of Terneuzen in the Netherlands for its two new Damen-built tugs – one of which is the first IMO Tier III-compliant tug in Europe. 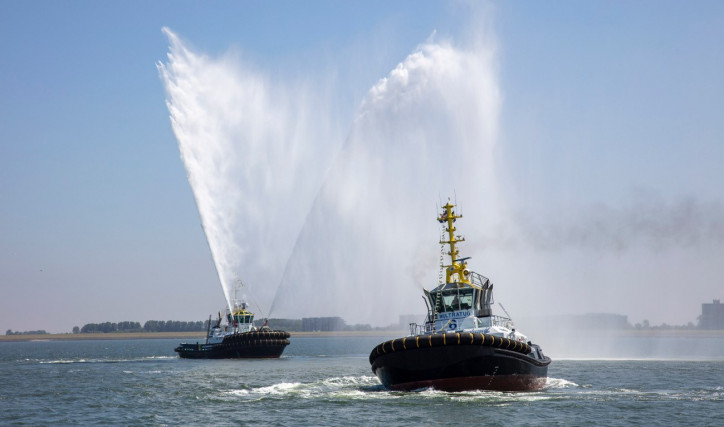 The vessels are a Reversed Stern Drive (RSD) Tug 2513 and an Azimuth Stern Drive (ASD) Tug 3212, which were officially named Multratug 6 and Multratug 29 respectively. The naming ceremonies took place on 28 June during the Terneuzen Harbour Days, a three-day maritime festival.

Multraship managing director Leendert Muller says, “The purchase of Multratug 6 was a combined response to the need for additional tonnage and a desire to reduce our exhaust emissions. We take responsibility for the environment and this is the reason that we have chosen an IMO Tier III-compliant vessel, the first of its kind in Europe. This is also in tune with the increasing demand from local port authorities for clean operations. The reduced noise and vibration levels exhibited by the RSD Tug 2513 was another deciding factor, because we really care about the comfort of our crews.”

Damen, meanwhile, has built up extensive experience of how to minimise onboard vibrations from its work in the superyacht and naval vessel sectors.

Damen’s Benelux Sales Director Mijndert Wiesenekker says, “Vibration is the enemy of any shipowner – and we draw on our knowledge to reduce it to a minimum on our tugs. This is another example of the benefits of our standardised shipbuilding strategy – we can improve vibration levels as the series progresses. This is important for the crew as well as for the equipment.”

While the RSD Tug 2513 is a new vessel type for Multraship, the ASD Tug 3212 design is well-known to the company’s personnel. In fact, Multraship has experience of operating five ASD Tugs 3212 over a period of time.

“It is our experience that these are very good vessels,” says Mr Muller. “Of course they can work inside harbours, but it is when conditions get rougher and tougher – offshore, for instance – that the seakeeping characteristics really show themselves. Our crews are extremely happy to have this new ASD Tug 3212 in the fleet. And this vessel in particular, with an open stern, stern roller and additional equipment, is a real multipurpose tug.”

Versatility of vessel design is a vital factor for Multraship, with Leendert Muller emphasising, “We believe that most of our port tugs should be able to work at sea, and that our seagoing tugs should also be able to perform port operations.”