Brittany Ferries yesterday (Jul08) confirmed names for its next ships. Kerry will be the name for the one-year charter vessel arriving in November 2019. As previously announced, this ship will cover the Cork to Santander route from November 2019 to November 2020. 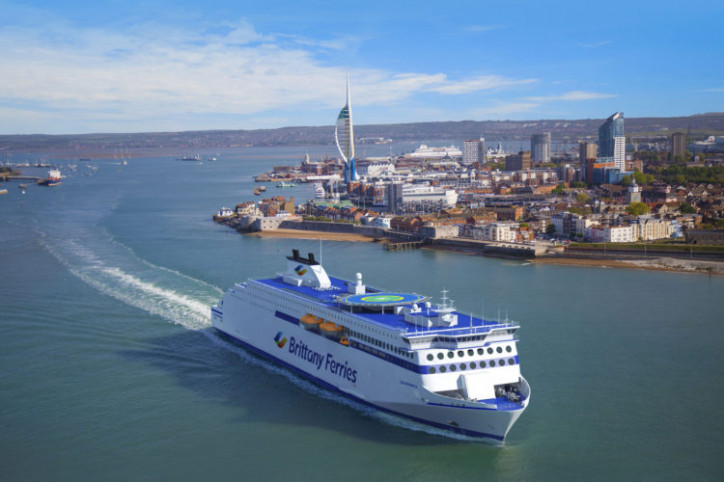 The company has also revealed that Santoña (pronounced Santonia in English) has been chosen for the company’s third E-Flexer class ship. To be chartered from Stena, Santoña is part of the company’s €550 million fleet renewal programme, with a clear focus on sustainable development. Santoña will arrive in 2023 and like sister ship Salamanca (see also CruiseMapper), she will be powered by environmentally-friendly Liquefied Natural Gas (LNG).

Santoña will be the third LNG powered vessel to join the Brittany Ferries fleet. The fuel burns more efficiently than diesel,so promises significant improvements in air quality as well as a reduction in greenhouse gas emissions.

Combustion produces no sulphur, virtually no particulates and 95% less NOx (nitrogen dioxide) than diesel. LNG is also up to 28% better in terms of greenhouse gas emissions according to findings of an independent, peer-reviewed report published in April this year*.

“Brittany Ferries is committed to LNG as the most environmentally-friendly fuelling solution currently available for shipping,” said Frédéric Pouget, Brittany Ferries director of fleet and port operations. “Despite the significant investment made in scrubber technology for our ships, we know that the best way to respect the environments in which we operate, and to exceed emission reduction targets, is to commit to LNG. This is what we have done with an investment worth half a billion euros.”

The company’s first LNG ship, Honfleur (see also CruiseMappper), will be operational next year. She is currently under construction in Germany and will serve the company’s busiest Portsmouth to Caen route. Salamanca will arrive in 2022 to carry passengers and freight on long haul routes between the UK and Spain. Santoña will join the fleet in 2023.

The company’s fleet renewal programme promises a significant reduction in carbon emissions per passenger compared with vessels currently operating between the UK and Spain. That’s because Cap Finistère and Baie de Seine, are less efficient vessels with much smaller passenger and freight capacities than the LNG e-Flexer class ships that will replace them

The company will also run four round trips from the UK to Spain each week, instead of five. This means a significant saving in fuel consumption and emissions, while still promising a 10% improvement in passenger capacity and 28% increase in freight space.

These savings, combined with improved efficiency thanks to better hull design and modern engines, and the use of LNG to power vessels, will realise an estimated saving of around 46% CO2 per passenger compared with current vessels on the company’s long-haul routes.

In terms of refuelling infrastructure, Brittany Ferries has developed an innovative solution to re-fuel its first LNG vessel, Honfleur.  In partnership with Total, industry-standard, containerised LNG will be trucked on board, then lifted into position by on-board cranes where they will replenish Honfleur’s fixed, on-board LNG storage tank. The process will be reversed when mobile tanks are empty.

Additional costs of Honfleur’s LNG systems and equipment have been partially offset by the support of the French Government “Program of Investments for the Future” (“Vehicle of the Future” sub-program) and operated by ADEME.

For Spanish operations, Brittany Ferries has signed a letter of intent with Spanish energy company Repsol for the delivery of LNG. Under the agreement between the two companies, Repsol will install quayside LNG storage facility at ports in northern Spain.  Confirmation is expected later this month. This will then be used to fuel both E-Flexer ships during their calls.

The E-Flexer class ships will be amongst the largest in Brittany Ferries’ fleet. Each will be 215 metres long with 3,000 garage lane metres for freight vehicles, and capacity for around 1,000 passengers.