The main objective of these joint patrols was to tackle Illegal, Unreported and Unregulated (IUU) fishing in Namibian waters. These initiatives assisted the MFMR and other Namibian law enforcement agencies to force illegal and foreign industrial factory trawlers out of the Namibian EEZ suspected to have targeted horse mackerel stocks through IUU activities.

Large foreign industrial factory trawlers – former Soviet Union made trawlers -  have been ‘border hopping`, sneaking into Namibia`s EEZ at night, plundering fish, predominantly horse mackerel, off Namibia’s famed Skeleton Coast. These illegal incursions have been exacerbated by heavy fog and shipwrecks in the area thereby making detection difficult. The illegal catches were then trans-shipped to large refrigerated cargo vessels, also known as reefers, waiting to load the illegally caught fish just outside of Namibian EEZ. Refrigerated cargo vessels are a major contributor to IUU fishing as legal catch can be mixed with illegal catch, thereby making it impossible to verify the origin of catches. That is why the Namibian Marine Resources Act bans transhipment out at sea and only allows it to happen in port or in the presence of law enforcement officers.

As a result of these intrusions, the M/Y Ocean Warrior, under the command of Sea Shepherd Volunteer Admiral Giuseppe de Giorgi (Ret.), former Chief of Staff of the Italian Navy (2013-2016) started patrolling the northern waters of Namibia on April 26th under the direction of the Namibian Law Enforcement Officers (comprised of fisheries inspectors and police officers) to stop incursions by large foreign industrial factory trawlers that have been crossing the northern maritime border into Namibia to poach horse mackerel. The joint operation was named Operation Vanguard. 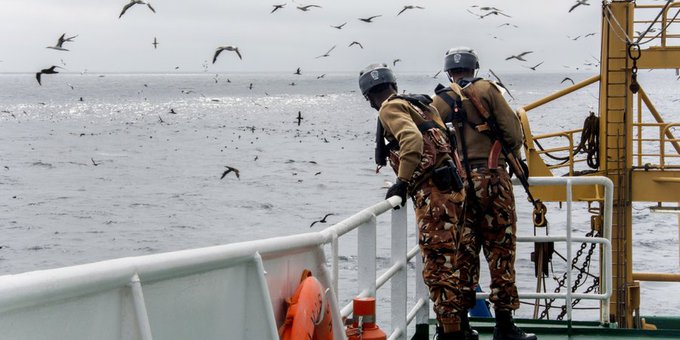 However, the confrontation and visibility of a patrolling presence off the Skeleton Coast by this joint operation caused a deterrence to fish poachers as no further incursions have occurred since the intercept, ensuring that the joint patrols have the intended deterrent effect that will allow horse mackerel stocks in the north of Namibia to recover from the fishing pressure of criminal operators. Namibia has one of the richest fishing grounds in the world, especially after the Namibian government significantly reduced the number of legally-licensed horse mackerel fishing vessels operating in Namibian waters. But illegal fishing has recently increased as formerly licensed fishing vessels have set up operations in other countries with the intent of poaching in the northern waters of Namibia.

“While the Namibian government has taken conservation measures to protect the horse mackerel fishery - critical to the economy and the ecosystem health of Namibia - these conservation measures must also include at-sea patrols. With the Operation Vanguard concluded, criminal operators plundering Namibian waters off the Skeleton Coast have received the message that the Namibian government is vigilant in defending its fisheries." - Honourable Bernhard Esau, Minister of Fisheries and Marine Resources upon briefing by the MFMR Director of Operations.

Since 2016, Sea Shepherd has been working in partnership with the governments of Gabon, Liberia, São Tomé and Príncipe, Benin and Tanzania to combat IUU fishing by providing the use of civilian offshore patrol vessels to African coastal states so that authorities can enforce fisheries regulations and conservation laws in their sovereign waters. To date, the unique partnerships have resulted in the arrest of 30 vessels involved in illegal fishing and other fisheries crimes.

The Ministry of Fisheries and Marine Resources value this partnership in pursuance of rooting out IUU fishing in its EEZ and will continue to make use of such generosity by Sea Shepherd. Would be poachers will be dealt with in terms of the law and punishment will be severe, the Minister further indicated.