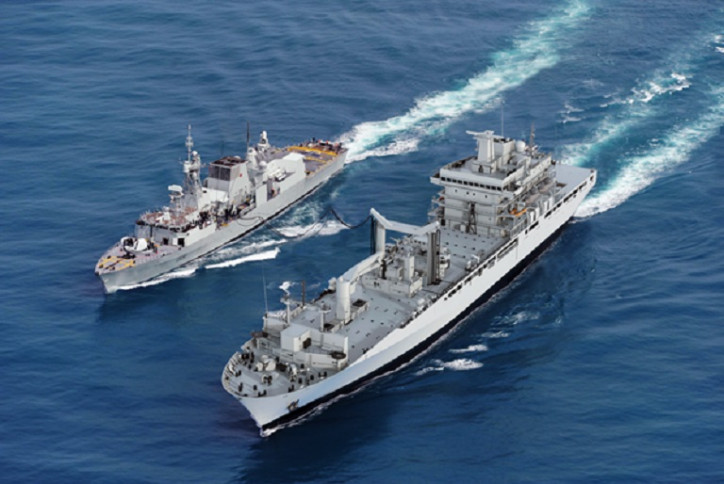 Hepburn will provide four Replenishment Stations for the Joint Support Ships, which will allow the vessels to transfer fuel, fresh water, and solid goods to and from other vessels. These Replenishment-at-Sea (RAS) systems will be fully compatible with NATO standards, thereby allowing the JSS to resupply and refuel Canadian and allied task force ships at sea, considerably extending their range of operations.

Hepburn is recognized as a world leader in the development, design and manufacture of RAS systems and has the most advanced digital control systems on the market. Hepburn is 100% Canadian owned and operated and has been providing these systems to navies worldwide for over half a century. As the only Canadian company designing and supplying such systems, Hepburn has built a global reputation based on the safety, performance, reliability, durability and ease of use of the equipment. This contract will support and sustain the creation of high quality mechanical, electrical and software engineering jobs here in Canada as well as highly skilled Canadian manufacturing jobs.

With its work under the NSS, Seaspan has issued more than $935M in committed contracts to approximately 630 Canadian companies. By building ships for the Canadian Coast Guard (CCG) and the Royal Canadian Navy (RCN) in Canada, Seaspan is helping to re-establish a sustainable marine industry here. As the company continues to make progress on its NSS commitments, this supply chain will grow as more Canadian companies realize new opportunities with a revitalized shipbuilding industry. It is through its work on the NSS that Seaspan is directly and indirectly helping to employ thousands of Canadians from coast to coast.

“This contract award is helping Seaspan Shipyards meet its economic benefit obligations to Canada on the Joint Support Ships Contract. The Industrial and Technological Benefits Policy helps create jobs and foster economic growth by requiring the company to undertake high value-added business activities and investments in Canada equal to the value of their contract.” - The Honourable Carla Qualtrough, Minister of Public Services and Procurement and Accessibility

“The partnership between Seaspan Shipyards and Hepburn Engineering demonstrates how defence procurement supports the growth of our innovative small and medium businesses. This investment will create good jobs for Canadians while providing the Royal Canadian Navy with the tools they need to succeed.” - The Honourable Navdeep Bains, Minister of Innovation, Science and Economic Development

“Seaspan Shipyards is pleased to announce a major contract award for Hepburn Engineering to provide the Replenishment-at-Sea systems for the Joint Support Ships. The work taking place at Hepburn is indicative of the world class standard of products and services that Canadian companies are able to competitively deliver as part of the broader shipbuilding industry. As a result of contract awards like these the National Shipbuilding Strategy is creating well-paid, highly skilled jobs and supporting economic growth from coast to coast.” - Mark Lamarre, Chief Executive Officer, Seaspan Shipyards

“On behalf of Hepburn Engineering Inc. I am pleased to announce that we will be providing the Replenishment-at-Sea systems for the Royal Canadian Navy’s new Joint Support Ships currently under construction at Seaspan’s Vancouver Shipyards. Hepburn has been the supplier of RAS equipment to the Canadian Navy for more than 50 years. Hepburn is proud to be a 100% Canadian owned and operated company with a reputation for providing quality replenishment systems to navies around the world.” - John Hepburn, President, Hepburn Engineering Inc.