The Vancouver Fraser Port Authority yesterday released the 2019 mid-year cargo statistics for goods and passengers moving through the Port of Vancouver. Between January 1 and June 30, 2019, overall cargo through the port increased 0.5% to a record 72.5 million metric tonnes (MMT) over the same time last year, with new mid-year records in containers, potash, grain and cruise passengers. 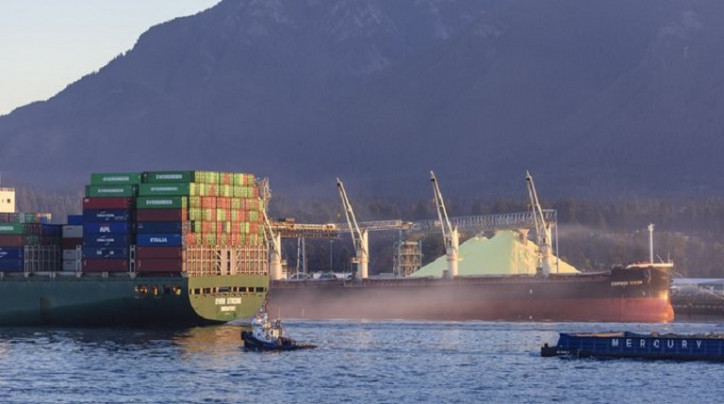 “This year’s record mid-year cargo volumes reflect what continues to be two of the Port of Vancouver’s greatest strengths—its broad global reach and ability to accommodate the most diversified range of cargo of any port in North America,” said Robin Silvester, president and chief executive officer of the Vancouver Fraser Port Authority. “While Canada is certainly not exempt from the challenges impacting global trade, the diverse range of trading partners and cargo handled through the Port of Vancouver ensures the entire port remains resilient, despite variations in any one sector or commodity.”

Strong global demand for Canadian grain resulted in a new mid-year record of 14.8 MMT (both containerized and bulk volumes). Increases in wheat, up 22.4%, and specialty crops, up 34.2%, more than off-set the 12.6% decrease in canola exports at mid-year, which was largely due to a 49.1% per cent decrease in canola exports to China in the first and second quarters of 2019. In fertilizers, potash exports increased 27.3% to record volumes of 5.5 MMT.

In Vancouver, containers arrive filled with electronics, food, clothing and other consumer goods. They leave loaded with Canadian agri products, local wine and craft beer, B.C. forest products and lumber, among other goods. Container trade through the Port of Vancouver is essential for Canadian businesses to gain access to international markets. Approximately $1 in $3 of Canada’s trade in goods beyond North America move through the port, with a significant portion of these goods moving in containers.

However, independent forecasts show that Canadian west coast container ports will be full by as early as the mid-2020s and therefore unable to accommodate growing trade, which will have far reaching consequences to the Canadian economy. In preparation for growth in trade shipped in containers, the port authority has partnered with terminal operators to expand and improve existing operations as well as government and stakeholders to invest in road and rail projects to support a more fluid supply chain.

“As Canada’s international trade continues to grow, it is our job as a Canada Port Authority to make sure the port is ready to handle the increasing trade volumes through Canada’s west coast,” continued Silvester.

However, even with the additional capacity provided by improvements to existing terminals and infrastructure, it won’t be enough to manage Canada’s future container trade demand, highlighting the urgent need for the port authority’s proposed Roberts Bank Terminal 2 Project. The proposed container terminal project would help realize our nation’s trade potential by providing the marine terminal capacity needed to meet Canada’s trade ambitions with Asian economies.

The Port of Vancouver welcomed a record number of cruise passengers so far this season, with a 15.1% increase over mid-year 2018 as demand for cruises to Alaska from Vancouver continues to increase.

“This year’s mid-year success is a result of the continued support of port terminal operators, marine carriers, rail and trucking companies, government and all those who make up the Port of Vancouver. Through their continued investments and commitments to capitalize on Canada’s expanding trade opportunities, the Port of Vancouver is well-positioned to continue supporting Canada’s growing trade,” added Silvester.