Britannia Maritime Aid (BMA), the registered charity leading the project, wants the vessel to be built in the UK and equipped with innovative British technology. The ship would be permanently based in the Caribbean, tasked with supporting disaster relief efforts and providing specialist training. 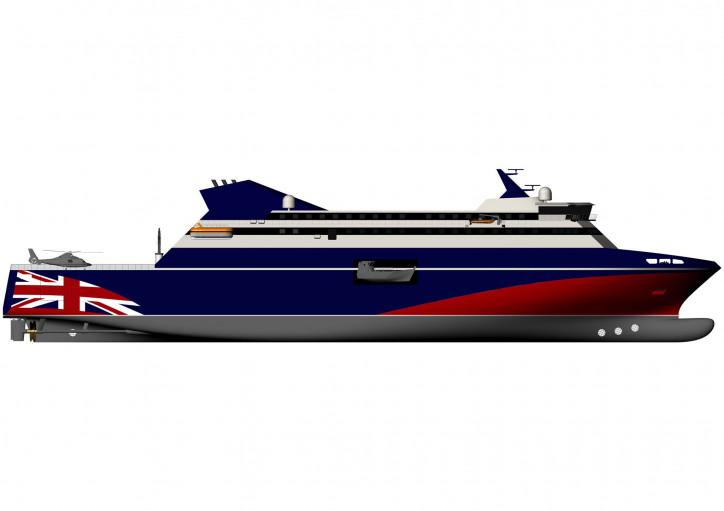 The ambitious scheme was officially launched at the UK Chamber of Shipping on Monday September 9 during London International Shipping Week 2019.

Tony Graham, Cammell Laird Chief Operating Officer, said the vessel’s design is a variant of Cammell Laird’s Ro-Pax platform, developed in conjunction with ship designers Leadship and first unveiled at the Nor Shipping trade fair in Oslo this summer.

Rather than being a one-off specialised vessel with limited applications, the first-of-its-kind disaster relief and training ship will have strong, versatile commercial Ro-Pax capability.

Mr Graham said: “Cammell Laird is proud to be supporting Britannia Maritime Aid in developing a design & build offer for a UK Aid and Training Ship. 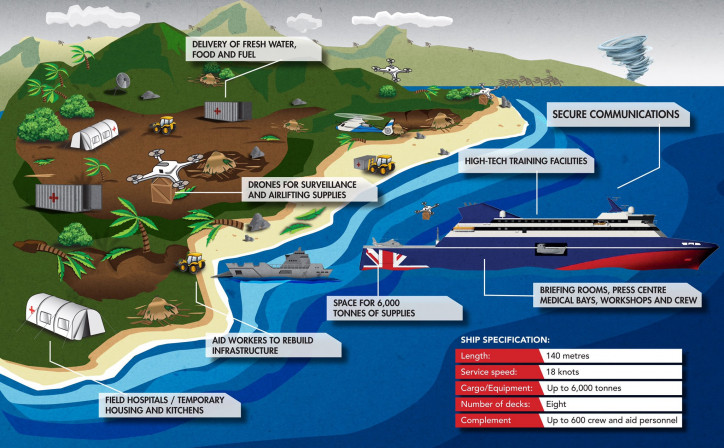 “Working closely with the Leadship design house our commercial approach gave Britannia Maritime Aid confidence in their requirement trade-offs, procurement cost estimate and support cost estimate. This technical and cost due diligence underpins the Britannia Maritime Aid business case. Our commercial design ensures great value for money and protects the vessel’s resale value as a cutting-edge Ro-Pax. We have also managed to incorporate and consider advanced technology concepts such as autonomous vehicles to maximise its operational capability and its future relevance.

“A British-built ship encourages the British public to feel a sense of ownership of a Britannia Maritime Aid vessel working on their behalf and sailing under the Red Ensign.”

Maritime professionals and training experts have joined forces for the project with backing from former First Sea Lords, the Lord West of Spithead and Admiral Sir Nigel Essenhigh.

Others supporters include members of the Houses of Lords and Commons, ship designers Leadship, unions RMT and Nautilus International, the UK Chamber of Shipping, the Merchant Navy Training Board the maritime charity London Trinity House and the Government of Barbados, whose Prime Minister will speak at the launch.

As well as supporting humanitarian aid missions in the Caribbean, the ship will provide sea training berths for the next generation of UK and Commonwealth officer cadets, rating apprentices and trainees in trades associated with aid and reconstruction.

Its crew will focus on the environment and ocean advocacy – including beach and coast clean ups, plastic collection and research.

BMA chairman Captain Kevin P Slade said: “Having a dedicated vessel with a training and aid function is a first of its kind for the UK and would ease the pressure on the limited resources that the Royal Navy and Royal Fleet Auxiliary can provide.

“It will be an innovative use of essential and finite funds, increasing the effectiveness of the UK’s disaster relief work whilst also increasing the supply of British seafarers and supporting ocean advocacy.

“BMA has launched a crowdfunding campaign for initial costs needed to finance a detailed business plan required for the next stage – obtaining the necessary funding to progress from concept to reality.”

“I fully support the proposals and urged others to give their support to ensure we make these very welcome plans a reality as soon as possible.”

The ship will be able to carry up to 6,000 tonnes of vehicles and aid supplies – more than ten times the capacity of current vessels – including field hospitals, field kitchens, tents, fresh water and fuel for devastated areas.

BMA’s project will provide much needed sea training berths at a time when the Government plans to double the number of Merchant Navy officer cadets under its SMarT Plus initiative.

It will also boost Britain’s disaster relief capabilities and ease the strain of aid operations on the Royal Navy while creating jobs in British shipbuilding and the Merchant Navy.

There will be opportunities for life-changing training experiences for non-maritime industrial apprentices within the aid and disaster relief teams in trades associated with repairing and rebuilding communities.

BMA aims to deliver its ship by 2024, and will charter or buy suitable ships to run operations until its purpose-built ship is ready.

It has started a crowdfunding campaign for initial costs but intends to gain long-term funding from the Government, industry, the private sector and benefactors.