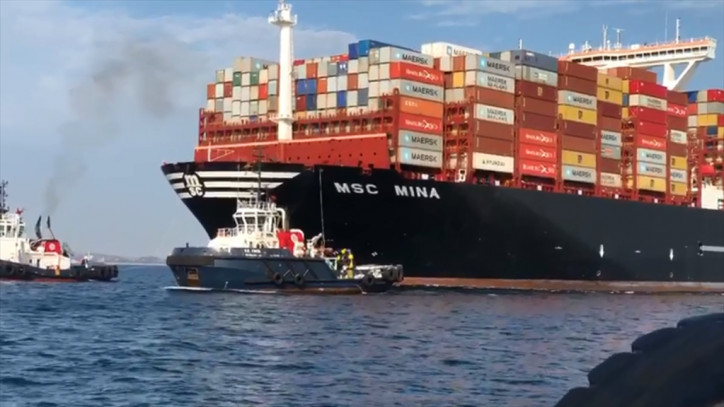 Tugs from Boluda Corporación Marítima’s towing division Boluda Towage Spain have recently towed the largest container ship in the world in and out of the port of Algeciras. Built this year, the MSC MINA a has 23,756 TEU capacity and is powered by 228,741 GT. The ship called at the port of Cadiz during its maiden voyage from the Chinese port of Xingang to northern Europe, a service operated jointly with Maersk.

The containership with the greatest container-holding capacity in the world was towed upon arrival at the Bay of Algeciras on 4 September by the tugboats VB JUANGONZALEZ, VB TITAN, VB TRON and VB ANDALUCIA, all belonging to the Boluda Towage Spain fleet in Algeciras. After unloading the containers with the help of six cranes, the vessel was assisted by tugs VB JUANGONZALEZ, VB CEBALLOS, VB TITAN and VB TRON when it set sail on 5 September bound for Bremerhaven, Germany.

Video of the maneuvering operation can be seen here

The MSC MINA is the first in a series of eleven sister ships that Korean shipyards Samsung Heavy Industries (SHI) and Daewoo Shipbuilding & Marine Engineering (DSME) are building for the shipping company, to be handed over during the next nine months. With 399.77 metres length, the MSC Mina is the first container ship with a beam of 61.04 m which allows it to transport 24 rows of containers widthwise and have a nominal capacity of 23,756 TEUs (about 1,500 TEUs more than other vessels in operation), more than 2,000 of which are reefers.

Boluda Towage is towage sector leader in Spain, and the second largest internationally, with a fleet of more than 300 tugs distributed throughout the main ports of Europe, Africa, Latin America and the Indian Ocean.