TOKYO-Mitsui O.S.K. Lines, Ltd. announced on Wednesday (Sep18) that it has participated in the LNG bunkering trial at the Port of Kobe, organized by the Kobe City Port and Harbor Authority, and carried out bunkering on the LNG-fueled tugboat Ishin. 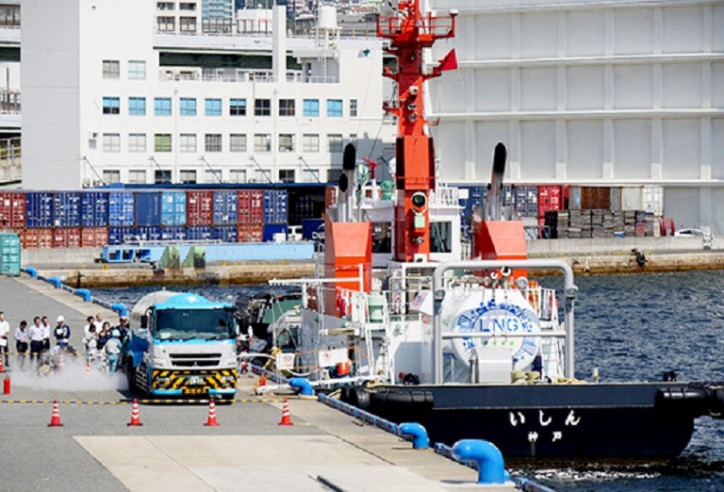 Ishin is a tugboat owned by MOL and operated by Nihon-Tug-Boat Co., Ltd.. This marks the first LNG bunkering in the Port of Kobe, and the successful trial confirmed that LNG fuel can be effectively supplied safely at the port.

LNG fuel for the trial was hauled by a tanker truck from the Himeji LNG Plant (Himeji-shi, Hyogo Prefecture) of Osaka Gas Co., Ltd., and, via a truck-to-ship system, was used to supply Ishin, berthed at Kobe Port’s Shinko Pier No.4. MOL Marine Co., Ltd. has also provided maritime consulting in the trial.

Effective January 2020, vessel exhaust emission regulations will be tightened on a global scale. In response to the new standards, an increasing number of LNG-fueled vessels are coming into service, making the development of LNG bunkering ports in Japan an urgent task. MOL Group companies are working together to promote the wider adoption of LNG fuel for vessels and reduce environmental impact through the safe operation of Ishin.

The Ishin's excellent environmental performance – including an estimated 25% reduction in CO2 emissions in comparison to tugs that run on A fuel oil – earned the top rating of four stars from the Ministry of Land, Infrastructure, Transport and Tourism's energy-saving rating program for Japan's costal ships.