Construction of a new ferry commissioned by Finnish-Swedish consortium Kvarken Link has begun at Rauma Marine Constructions’ shipyard, with a traditional starting ceremony. The car and passenger ferry, set to operate between the Finnish city of Vaasa and the Swedish city of Umeå, will employ a hybrid power generation system as well as an electric propulsion system rarely used in car and passenger ferries, which will make the vessel the most environmentally friendly RoPax ferry under construction. 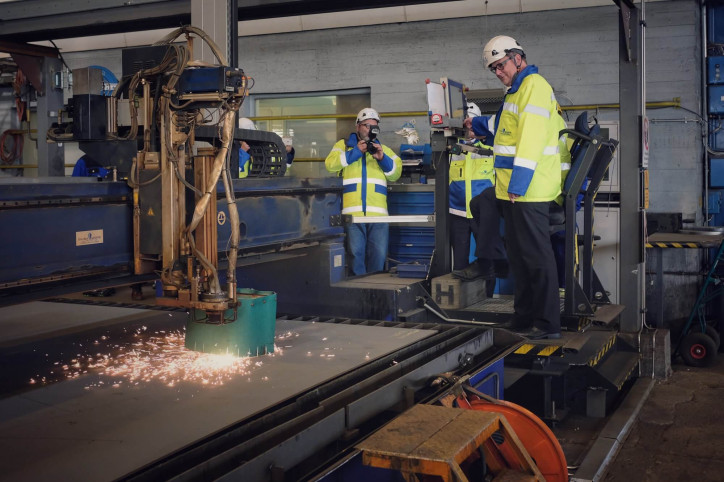 The construction of a new car and passenger ferry has begun at Rauma Marine Constructions’ shipyard. The start of production was accompanied by a celebratory traditional steel cutting ceremony at the shipyard Monday September 16, 2019. The ferry, commissioned by Finnish-Swedish consortium Kvarken Link, will operate in the Gulf of Bothnia between the city of Vaasa in Finland and city of Umeå in Sweden. Kvarken Link is owned by the City of Vaasa and the municipality of Umeå. The ferry will accommodate approximately 800 passengers and will have a freight capacity of 1,500 lane meters for lorries. Outfitting design of the vessel will be carried out simultaneously with the construction. The vessel will be highly environmentally friendly and it will be the first RoPax ferry in the world to be awarded with a Clean Design certificate.

”The new ferry will be the most environmentally friendly vessel in its category so far. The vessel’s machinery will run on a dual fuel solution: besides liquefied natural gas it can also be operated using biogas, produced in the city of Vaasa. In addition, when the vessel is approaching the harbour, the main engines of the vessel can be switched off and the vessel can operate the remaining distance utilising battery power”, explains Jyrki Heinimaa, CEO, Rauma Marine Constructions.

The ferry will have class notation Clean Design, which is awarded by the international accredited registrar DNV GL. This supports RMC’s aim to contribute to the development of the maritime industry in utilising cleaner energy options and technology solutions.

The steel cutting ceremony will be followed by the launch of the vessel, which is estimated for the start of year 2020. The vessel will be delivered to its owner during spring 2021.

Outlook for the current year is good

The new ferry for Kvarken Link is the second biggest vessel currently under work at the RMC shipyard. The new Shuttle ferry for Estonian shipping company Tallink will be significantly larger in size. The ferry’s planning and design phase of the ferry for Tallink will continue alongside the construction of the Kvarken Link ferry, which will have a substantial effect on employment, totalling around 800 person-years. At its peak, the vessel will employ some 500 people.

"RMC:s aim is to the be the leading provider of car and passenger ferries in Europe. The ferries for Kvarken Link and Tallink will provide a solid base for this mission. These too projects, alongside some other acitivites, are indeed keeping us quite busy at the moment, with the financial outlook for the year looking promising. Naturally, we will also continue to look for new potential ship orders alongside the current orders entering into production,” says Heinimaa.

The new ferry will replace the Wasa Express ferry operated by Wasaline. Once completed, the ferry will operate daily across the Gulf of Bothnia.