OHT’s new heavy installation crane vessel Alfa Lift, currently under construction at the China Merchants Heavy Industry (CMHI) facility in Jiangsu, has reached its second significant build milestone with the laying of the Keel, weeks ahead of schedule. 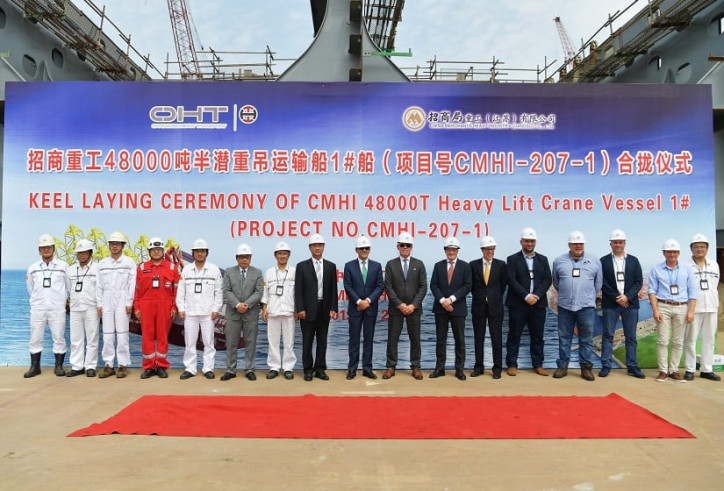 For the first time, the fabricated blocks have come together for assembly in the dry dock and the vessel will start to take shape. This is the next significant step in bringing Alfa Lift to the market, following the Steel Cutting Ceremony that took place on March 1st of this year.

This milestone was marked with a Keel Laying Ceremony on the 25th September, attended by OHT Owner and Chairman Arne Blystad, together with CEO Torgeir E. Ramstad, Head of Project Execution Bertil Rognes and Alfa Lift Project Manager Bjarne Birkeland. Also present were CMHI General Manager Mr. Wallace Yao, and other senior CMHI Management in addition to representatives from DNV-GL and other suppliers.

OHT’s CEO Torgeir Ramstad commended the hardworking people at CMHI and key suppliers, having made great progress since the first milestone in March.

“We have worked together with the shipyard in an open and cooperative way to ensure the utmost quality of construction. Because OHT places a high degree of importance on quality.” Said Mr. Ramstad. “According to our customers our vessel will be ground-breaking and will serve the growing offshore wind market for decades to come. The word “growing” is perhaps not precise enough to describe what is happening in the offshore wind market.”

Bjarne Birkeland, Alfa Lift Project Manager added: “The spirit at the Keel Laying Ceremony reflected the energy and enthusiasm for this ground-breaking project and I am proud to be a part of it. We highly appreciate the good cooperation between CMHI and our staff. They are all working hard to achieve high quality and timely delivery.”

The Alfa Lift design vessel will be the largest and most innovative, custom-built offshore wind foundation installation vessel in the world. The vessel is due to be delivered early 2021. The next major milestone will be the launching ceremony which is planned for March 2020.