The Port State Control Committee, the governing body under the Memorandum of Understanding on Port State Control in the Asia-Pacific Region (Tokyo MOU*), held its 30th meeting in Majuro, Marshall Islands, from 14 to 17 October 2019. 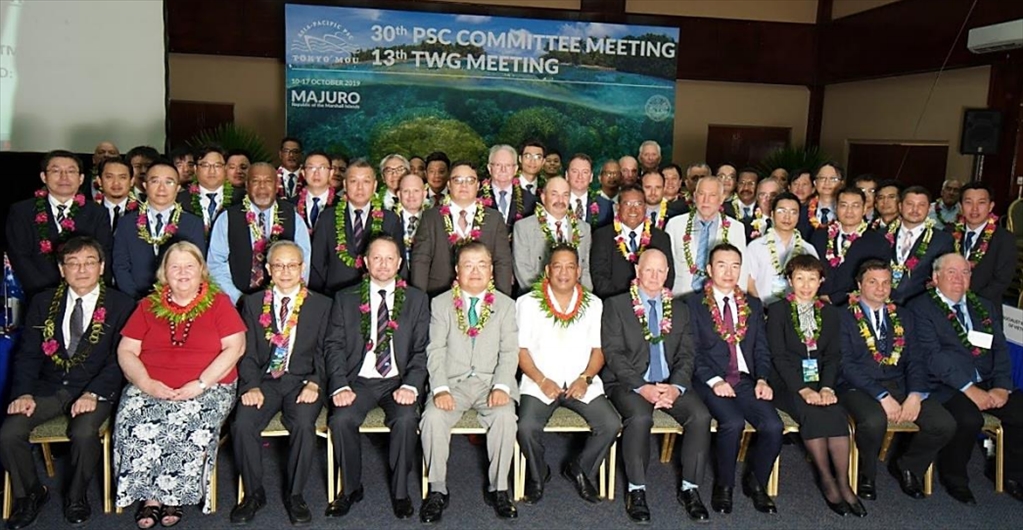 The 30th meeting of the Committee was chaired by Mr. Alex Schultz-Altmann, Manager, Ship Inspection and Registration, Operations Division, Australian Maritime Safety Authority. The meeting was officially opened by Honorable Thomas Heine, Minister of Transportation, Communications & Information Technology of Marshall Islands. In his opening speech, Mr. Heine firstly appreciated the great opportunity for Marshall Islands to host the 30th Meeting of the Port State Control Committee of Tokyo MOU and welcomed all delegates to Majuro. Then, Mr. Heine stressed the importance of port State control for Marshall Islands from the view point that Majuro is a major fisheries trans-shipment port. He reconfirmed active participation in and full co-operation with Tokyo MOU by Marshall Islands.

Attendance of the meeting

Prior to the Committee meeting, the 13th meeting of the Technical Working Group (TWG) was convened from 10 to 11 October 2019. The TWG meeting discussed matters relating to PSC technical procedures and guidelines, the Concentrated Inspection Campaigns, the information system and information exchange, evaluation of works done by intersessional technical groups and technical co-operation activities.

Decisions of the Committee Having completed a three-year term as a Co-operating Member Authority, Panama applied for a full membership of the Tokyo MOU. The Committee considered the application by Panama and the report of a fact finding mission, which confirmed full compliance with the qualitative membership criteria by Panama. In accordance with provision of the Memorandum, the Committee unanimously agreed to accept Panama as the 21st member Authority. The Committee considered and adopted amendments to the Memorandum relating to full membership of Panama.

The Committee considered and revised the list of follow-up actions emanating from the Ministerial Declaration, “Safeguard Responsible and Sustainable Shipping” adopted at the Third Joint Ministerial Conference of the Paris and Tokyo Memoranda on Port State Control, held in Vancouver, Canada, from 3 to 4 May 2017. As part of this consideration, the Committee discussed advisory information as part of an education campaign aimed at preventing marine casualties caused by cargoes. The Committee also examined draft guidelines on the inspection of ships covered under SOLAS Chapter I Regulation 4 aim at assisting Flag States in acting to ensure the safety of ships flying its flag. The Committee will continue to review and update the list based on the progress of actions and achievements of the member Authorities of the MOU and its Secretariat.

The Committee considered and approved the final report of the CIC in 2018 on MARPOL Annex VI, which will be available on Tokyo MOU website in the near future. The Committee also considered and approved the general arrangements and preparations for the joint CIC with the Paris MoU on Stability in General in 2020. The Committee took note of ongoing preparation for the joint CIC on STCW in 2021. The Committee considered possible topics for future CICs and agreed to accept the proposal by the Paris MoU for carrying out a CIC on Fire Safety System in 2022. The Committee further considered and approved the amendments to the policy on joint CIC, which is harmonized with that of the Paris MoU. The Committee considered and agreed to conduct a trial on remote follow-up inspection approach, through which PSCOs would be able to verify and close, without physically visiting the vessel, certain deficiencies in specific circumstances where such a mechanism can be used where there is appropriate and reliable evidence of rectification of deficiencies. The exercise of such a mechanism will be solely at the discretion of the port State. The Committee noted with satisfaction effective and successful implementation of the technical co-operation programmes. The Committee expressed its appreciation to the Nippon Foundation for kindly providing the funds, to Authorities for their support and co-operation and to the Secretariat for organization and co-ordination of the technical co-operation activities. . Date and place of the next Committee The 31st meeting of the Port State Control Committee will be held in Jeju, Republic of Korea from 16 to 19 November 2020.

*The Memorandum of Understanding on Port State Control in the Asia-Pacific Region, known as the Tokyo MOU, was signed among eighteen maritime Authorities in the region on 1 December 1993 and came into operation on 1 April 1994. At present, Tokyo MOU consists of 21 member Authorities: Australia, Canada, Chile, China, Fiji, Hong Kong (China), Indonesia, Japan, Republic of Korea, Malaysia, Marshall Islands, New Zealand, Panama (accepted at the current meeting), Papua New Guinea, Peru, Philippines, Russian Federation, Singapore, Thailand, Vanuatu and Viet Nam. Mexico adheres to the Tokyo MOU as a co-operating member Authority. The Democratic People’s Republic of Korea, Macao (China), Samoa, Solomon Islands, Tonga, the United States Coast Guard, the International Maritime Organization, the International Labour Organization and the Secretariats of the Paris, the Indian Ocean, the Black Sea, the Riyadh, the Caribbean and the Abuja Memoranda of Understanding on Port State Control and the Viña del Mar Agreement are associated with the Tokyo MOU as observers. The Secretariat of the Memorandum is located in Tokyo, Japan. The PSC database system, the Asia-Pacific Computerized Information System (APCIS), was established. The APCIS center is located in Moscow, under the auspices of the Ministry of Transport of the Russian Federation.