Chinese shipyard Hudong Zhonghua has won the contract to build a pair of mid-sized LNG vessels for a Malaysian LNG project. The vessel, with a total length of 239 meters will feature GTT’s NO96 containment system and will be built on Hudong Zhonghua’s G4 Changxing series LNG ship family.

The in-house developed ship design is suitable for shallow-water operation in coastal areas of the Southeast Asia and inland waterways such as the Pearl River, Huangpu River, and the middle and lower reaches of the Yangtze River.

The shipyard said it is the first type of river-sea combined transportation LNG carrier it is set to build.

The vessels will be used to serve the 12-year deal Malaysian energy giant Petronas’ deal with Shenergy Group Company.

Petronas agreed to supply approximately 1.5 mtpa of liquefied natural gas (LNG) to the Wuhaogou receiving terminal in China starting from 2022. 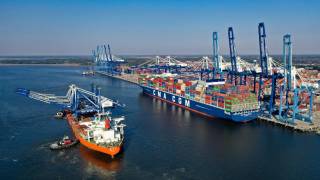