Port of Riga Sets Goal: Number of Cruise Ships and Their Passengers Must Be Doubled

Over almost half a century, the cruise industry has experienced dynamic growth, initially driven by the demand for cruise travels in North America and the recent demand in Europe and rest of the world, especially China and Australia. The demand for cruise ships in regions of the world has increased from 23.34 million passengers in 2014 to 26.76 million passengers in 2017. Market trends suggest that the number of cruise passengers worldwide may increase by another third by 2030, revealing more and more new tourist routes and market niches. 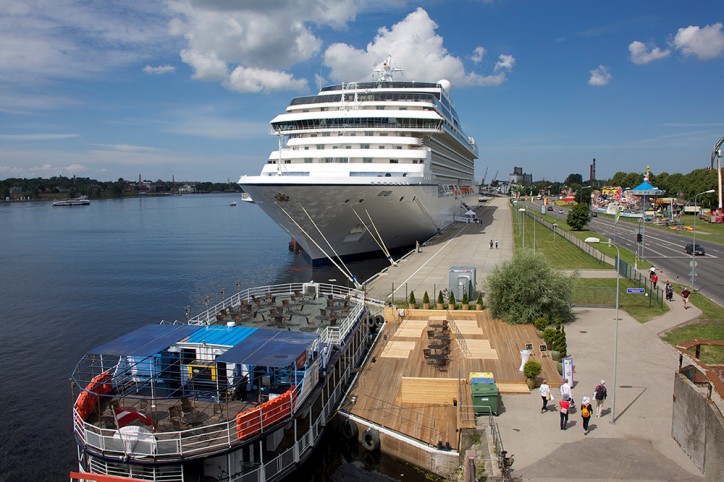 The development of the cruise sector is also set in the development vision of the Freeport of Riga for the upcoming decade as one of the crucial directions. The goal is to almost double the number of cruise ships and their passengers, making Riga an important cruise and passenger ferry port in the Baltic Sea Region. While the Port of Riga handled 75 thousand cruise passengers in 2018, it is planned to increase this number to almost 160 thousand by 2030.

The use of this potential largely depends on the availability of proper infrastructure. The existing infrastructure of cruise terminals is insufficient. The Riga Passenger Terminal has a good location; however, the length of the pier and the territory for the performance of land operations are limiting factors in satisfying the growing demand of cruise ships. In turn, the Krievu Island terminal, which is currently being used for accepting cruise ships during peak periods, is not suitable for cruise ships due to the long distance from the central part of the city and its unattractive environment.

New opportunities for the development of cruise lines are provided by the Krievu Island project. Cargo is gradually leaving the historical centre of Riga, vacating the place for tourists. A more than 600 m long pier, as well as access roads and infrastructure, are being vacated in Andrejsala and Ekportosta.

“By putting this territory in order, cruise passengers will be ensured access to the city centre on the right bank. This gives us an opportunity to not only efficiently handle the current flow of cruise ships, which tends to grow, but also to implement an ambitious plan, i.e., to make the Port of Riga a place where cruises both start and end”, notes Edgars Sūna, Deputy Manager for Port Development.

To create an even more attractive and competitive offer for cruise passengers, all the parties involved must cooperate. Sūna added: “Of course, to implement this plan, both the port and the entire tourism industry must do their homework. The airport, the railway, the public transport and hospitality companies must cooperate to create the best offer possible — from convenient air and transport connections to good guide services in the old city.”