The Grimaldi Group announced on Tuesday that its RoRo container vessel, Grande America, who caught fire the night of March 10/11 in the Bay of Biscay sunk Tuesday afternoon.

“We are pleased to confirm that there was no loss of life or injury among the 26 crew and one passenger who had left the vessel in the early hours of March 11 and were picked up by HMS Argyll and taken to Brest, where all are safe and sound. 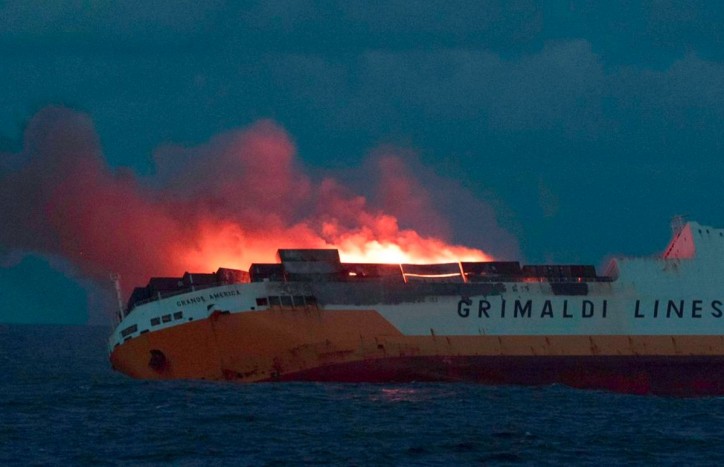 The fire was caused by some cargo loaded on board the vessel and the firefighting operation by the crew had to be discontinued when the ship had to be abandoned in order to avoid any risk for the crew’s safety.

After the fire brought up, the Grimaldi Group promptly entrusted the international leading salvour company Ardent with the salvage operations. In this respect, the anchor handling tug, Union Lynx, left Vigo (North Spain) during the night of March 11 with a ten man salvage team onboard and arrived at the place of the incident at 20:00 hours local time on Tuesday (Mar 12). As well, the specialist fire-fighting vessel, Terasea Hawk, left Rotterdam on March 11.

Unfortunately, with the weather worsening and the vessel’s list getting more considerable, the Grande America sank Tuesday at 15:26 hours local time, at about 140 nautical miles south west from Brest, at the position 46 04’ 8 N 05 47’ 4 W and a depth of 4,600 metres.

The Grimaldi Group is now arranging, under the guidelines of the French Authorities, the prevention of any potential damage to the marine environment resulting from the vessel’s sinking.

“The Grimaldi Group takes the opportunity to express its sincere gratitude and appreciation to the French Authorities for their dedication and professionalism in overseeing and supporting the salvage operations in the circumstances.

Similar thanks should go to the Royal Navy, and to the crew of HMS Argyll, for having safely rescued the Grande America’s crew and passenger.” 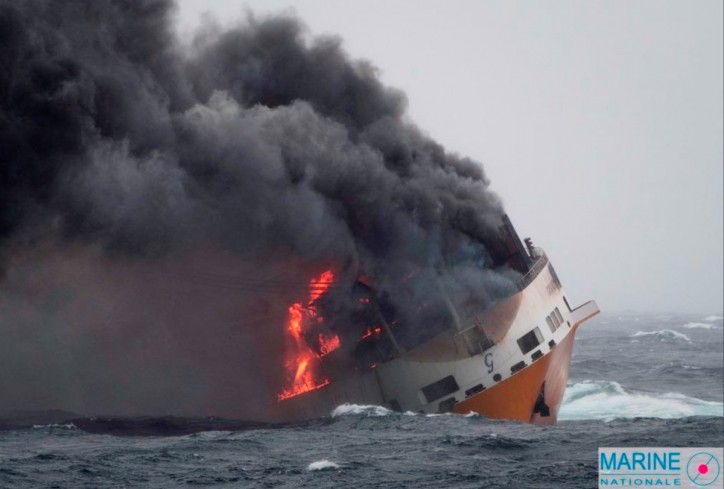 Following the sinking of the RoRo container vessel, the Grimaldi Group released the following update:

At the moment of the incident, the Grande America had onboard freight composed of rolling units, containers and some general cargo, loaded in Antwerp and Hamburg with destination Casablanca (Morocco), Dakar (Senegal), Conakry (Guinea), the Brazilian ports of Suape, Vitoria, Rio de Janeiro, Santos and Paranagua, Zarate (Argentina) and Montevideo (Uruguay).

Total vehicles onboard were 2,210, with new ones being 1,298 (originating from the major vehicle manufacturers).

With reference to the carriage of IMO-classified cargo, the Grimaldi Group has already in place a very stringent policy, beyond the class requirements for this vessel, with over 100 commodities specifically banned (including explosives, radioactive, corrosive and toxic material, etc.).

In the framework of its anti pollution plan, the Grimaldi Group has immediately dispatched in the place of sinking of the Grande America the Anchor Handling Supply vessel Union Lynx which is monitoring any ship’s fuel spill and is organising the recovery of any floating container.

A Grimaldi-appointed team of experts in marine casualties and pollution prevention is already in Brest in order to monitor the environmental situation and advise any further measures, always in coordination with the French Authorities.

Moreover, in agreement with the French Authorities, the Grimaldi Group will undertake a submarine survey of the wreck, located at 4,600 metres sea depth, by means of the vessel Pourquoi Pas, equipped with a modern ROV (Remotely Operated Vessel).