The Stena Europe, which operates on the Fishguard – Rosslare ferry service is currently undergoing a significant three-month refit visit to the Gemak Shipyard in Tuzla, Turkey. 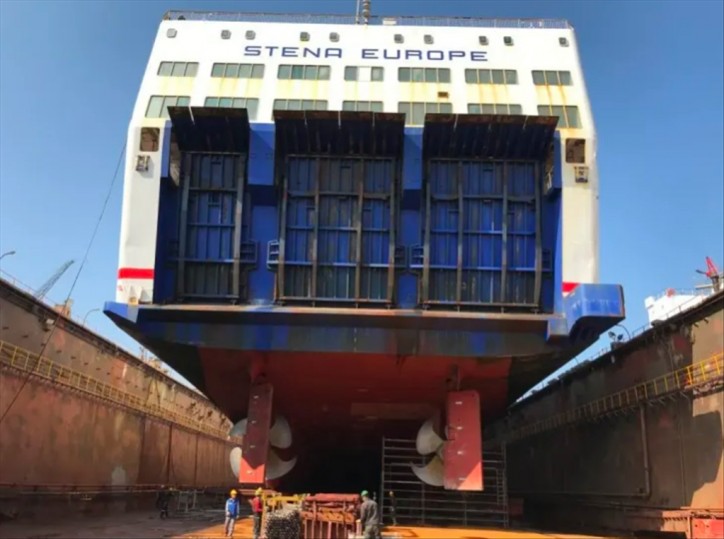 The vessel (see also CruiseMapper) is scheduled to return late June 2019 and during the visit a number of upgrade projects will be completed. One of the most significant projects to be undertaken includes modifications to the deckhead levels on the main vehicle deck to allow for the carriage of full-height trailers across the whole of the main vehicle deck. Prior to arrival at the Turkish shipyard, Stena Europe was restricted to carrying full-height trailers on its port side only.

Other works will include the renewal of the majority of the ship’s windows, engine and hull overhauls including blasting the whole hull to remove all the existing old paint-work to improve fuel efficiency and the ship's appearance. Internally, the passenger stairwells will be revamped, a redesign of the Barista Coffee outlet, as well as upgrades to the passenger Information Desk and other decor improvements. During the refit period, the Stena Europe has been replaced by the Stena Nordica on the Rosslare-Fishguard service.

Ian Davies, Stena Line Trade Director (Irish Sea South) said: “Our ongoing ship refit programme is an important part of our business operation ensuring that our fleet operates to its maximum efficiently and is further evidence of Stena Line’s rolling investment programme for the region. The Stena Europe is an important part of our Irish Sea South fleet and we look forward to welcoming a revamped vessel back to our Rosslare-Fishguard service in the summer with the capacity to accommodate even more full-height trailers while still carrying up to 1,400 passengers.

This is an important year for Stena Line on the Irish Sea as preparations are made to receive the first of its new generation E-Flexer series vessels, the Stena Estrid (see also CruiseMapper), which is scheduled to enter service on the Dublin to Holyhead route in early 2020, the first of three new E-Flexer vessels bound for the Irish Sea region..

Stena Line is the largest ferry operator on the Irish Sea, offering the biggest fleet and the widest choice of routes between Britain and Ireland including Dublin to Holyhead and Rosslare to Fishguard routes, Belfast to Liverpool and Heysham, Belfast to Cairnryan, a total of 232 weekly sailing options. Stena Line also offers a direct service from Rosslare to Cherbourg with three return crossings a week.